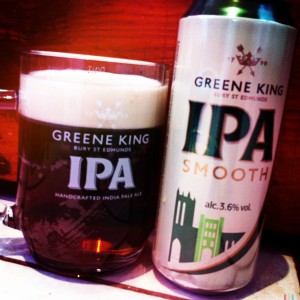 IPA in a Smoothflow can?
For me the answer is a resounding NO.
Supposedly Greene King have tweaked the recipe to their flagship beer.
If they have then there’s so little difference that it’s hard to tell what they’ve done other than write a few extra tasting notes up the side of the can in an attempt to convince you that what you’re about to drink is, “[a] perfectly balanced beer, characterised by its hoppy taste and aroma,” and sticking a widget in it to make it feel like you’re pouring beer coloured paint onto your tongue.
Should a beer’s head look and feel like it’s been cut from memory foam?
Again, for me the answer is NO.
Considering the use of various techniques to make this beer feel thick and creamy it tastes very watery and there’s an unpleasant bitterness.
It’s not the bitterness of a load of hops being brewed with care, instead it tastes really rather chemically produced.
I’m not suggesting that the brewery is using anything unnatural, they’ve just managed to create something that tastes that way, and there’s just so little that’s really recognisable here.
The “[…] pale and crystal malts […]” are noticeable by their absence.
There’s a gap right in the middle of this beer rather like a Tied pub wall with the legend, “Malts woz ‘ere” sprayed across it.
Oh, and now I think about it, why would you want your India Pale Ale to be thick and creamy smooth?
IPA should be pin sharp, bold and pointy, not thick and fluffy.
Shouldn’t it?
This is like being smothered in your bed by the enemy of hops.
I’m sorry Greene King people, you’re all ever so nice but man alive you need to take a long hard look at what you’re doing.
You are in a position to help educate the beer drinking masses about how good British beer really can be, and instead you seem determined to be the Watney’s Red Barrel of the 21st Century.