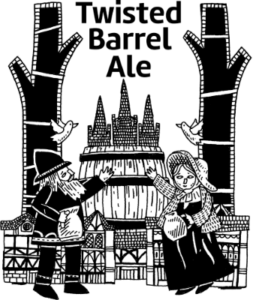 It was a few months ago now that I first came into contact with Coventry’s Twisted Barrel Brewery (@TwistBarrelAle), and I was immediately taken by not only their beer, but also their branding and a little later, having had one or two conversations with them, their attitude.
But rather than me tell you all about it, let’s have a chat with Ritchie.

Who are you and what do you do?
I’m Ritchie Bosworth, my job title is Head Brewer here at Twisted Barrel Ale, but what do I do?
That’s a long list! Any and all of the following – Managing Director, Sales Director, delivery guy, brewer, cleaner, racker, barman, accountant, purchaser, credit controller.
I co-founded the brewery with my colleague Chris and our partners Jen and Annie back in July 2013. 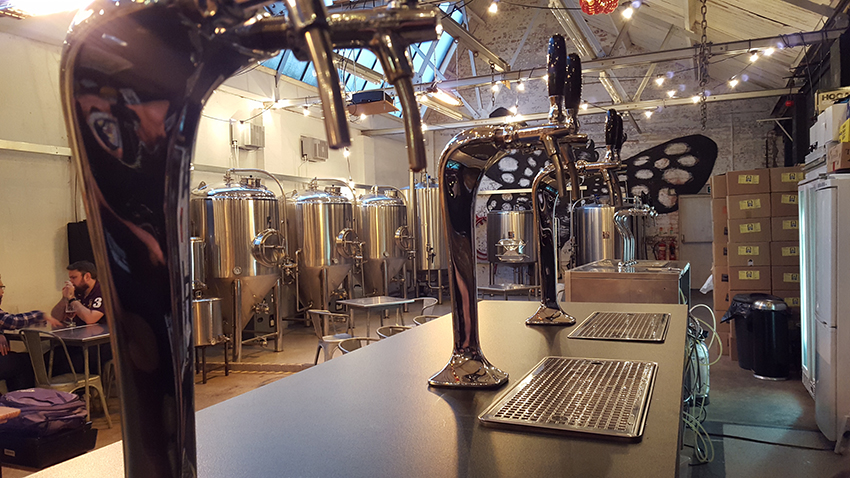 When did Twisted Barrel begin, how and why?
Twisted Barrel began, as most beery related enterprises do, following a drunken conversation, specifically in the Craven Arms beer garden in Coventry many years ago after a few too many pints of Sarah Hughes Dark Ruby Mild.
We’d all been into ales for a few years, going on brewery tours, trying many different varieties of beer, visiting beer related tourist spots in other parts of the UK and Europe.
We decided to start a podcast called All Hail The Ale in which we’d rate beers and discuss the beer world in general.
The podcast led us to the conclusion that we should probably know a bit more about brewing if we were going to criticise other people’s beer and so our partners, Jen and Annie, bought Chris and I home brew kits for Christmas one year.
We began with a kit each, I brewed a Sarah Hughes Dark Ruby clone and Chris the Woodfordes Wherry kit. We really enjoyed the process and tasting the outcome, but we didn’t particularly take to kits and so carried on the hobby but designing our own recipes.
After practising by creating beer for friends’ parties, weddings, stag do’s etc, we decided to research how to set up a brewery, and after realising this was fairly straightforward we established the smallest commercial brewery in the UK (at that time) in July 2013.
Our first official commercial brew was on New Year’s Eve 2013 on our newly purchased 60 litre all grain kit. We continued brewing for a year on our 60 litre kit, releasing a loosely based range of four core beers and monthly specials.
Both Chris and I continued to work full time, so we’d get together once a fortnight at Chris’s house and brew, releasing approx 250 bottles each month to local outlets.
We started the brewery as a potential new career for us all. I worked in accountancy and wasn’t particularly happy doing so, in fact I’d been actively looking for a new career for about 10 years. Chris similarly was a little disenchanted with the world of IT and loved brewing.
So, starting out a small level allowed us to receive critical feedback, test our recipes and processes, and dip our toe into the world of brewing to see if we enjoyed it before giving up our respective well paid career jobs. Brewing isn’t exactly known as a well paid career path so we knew we needed to be sure before embarking on such a change of lifestyle.
Fast forward to July 2014 and we heard about a new creative arts village opening next to Coventry city centre. We’d been releasing beers commercially for about four months by this point and were really enjoying the beer making process, it was a welcome release from the more mundane aspects of our day jobs. We decided to approach the company establishing the village to see if they’d be interested in hosting a brewery tap and they were very receptive to the idea. So, we began our expansion plans to move on to a 6 barrel commercial kit and open our own Tap House.
The expansion process took about 9 months. The first few months were spent preparing our business plan, the next three months securing finance, and then finally ordering our kit and agreeing lease terms with the landlords. We moved into our new unit in March 2015, had the new kit installed at the beginning of May and opened our doors to the public on 20 June. I’d left my job in January 2015 to manage the expansion process and take on the responsibility of running the business and the brewing duties. Chris has remained in full time employment as he and his partner are currently starting a family and so it didn’t feel like the right time to make such a risky leap.
We now have a team of two full time staff, myself and Carl, managing the business and brewing, and a team of three bar staff who keep the Tap House running at weekends. We have a great team of Directors and volunteers who help out whenever they can too, which is absolutely vital at such an early stage of our growth. 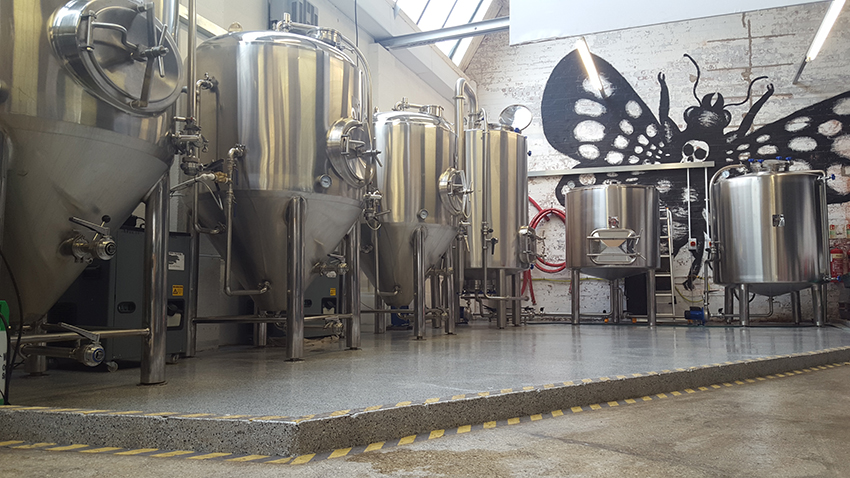 Where does the name Twisted Barrel come from?
We consider ourselves a modern brewery that uses very traditional methods for making beer. The ‘Barrel’ refers to the symbol of traditional beer making methods. ‘Twisted’ refers to our modern approach to brewing in which we concentrate on packing as much flavour into a glass of beer as possible rather than taking a more traditional businesslike approach focussed on profit margins and growth.

Where do you brew and what do you use?
We brew at our Brewery and Tap House at Fargo Village, Coventry. We use a bespoke 6 barrel kit sourced and provided by Brewing Vessels Limited who are based in Stockport.

What music do you listen to in the brewery?
Our musical tastes are mostly rock/alternative.
When we can’t be bothered to choose any music we’ll stick Absolute Classic Rock or any old US digital rock station on the Sonos player.
If Carl is on his own it tends to range from Death Metal to soft rock (he’s got eclectic tastes).
I’ll most likely listen to Baroness or some Post Rock or Screamo, or just the cricket if England are playing!
When we’re open to the public we tend to veer between modern hard rock and Motown/rock n roll/rockabilly on the stereo, depending on the mood of the crowd and staff.

What are your plans for the future?
One year into operating at a commercial size we are working on the next phase of our expansion plans. We’ve decided to focus on the direction of opening more of our own outlets and so are looking at opportunities in this respect. Our Tap House has been phenomenally successful during the first year and so it would seem a shame to lose all of the learning we’ve gained from running our own venue. Brewing wise we’ll likely expand through increasing our fermentation capacity for now, as we’re operating at capacity currently and have no wish to re-locate the brewery in full. 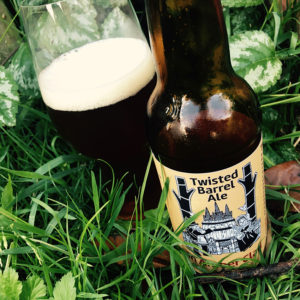 In Amber Clad (6.5%)
At some point I will stop telling you all how much I love Rye beer.
But not today.
I love rye beer with a passion verging on obsession.
And this little IPA, which is packed with hops, is further proof that I’m correct in my affections.
Pouring a rich amber, the smell is pineapple, mango and caramel biscuits, and you find some of those biscuits in the flavour too, the malting giving you honey and warm toast and a big earthy spiciness from the rye.
Oh the rye.
It’s rich and round and meaty and I love it.
It just works so well against the weight of the hopping of a good IPA such as this is.
The hops you see, and there’s a lot of them, provide a huge blast of fresh grapefruit, lemon zest, sherbet, mango, guava and passion fruit, some green leafiness and pithy mown grass at the edges, leaving you with a long dry bitter finish.
Super. 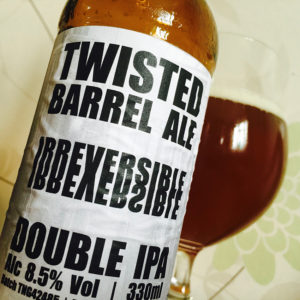 Irreversible (8.5%)
Oh my goodness, this is fabulous.
In fact it’s the biggest, roundest, juiciest Double IPA I’ve had for a very long time.
It pours a deep amber with a nice little fluffy head and smells of brandy soaked peaches.
The malting is a chewy joy, mouthfuls of toffee and pecan pie, honey and shortcake biscuits, and the hops are stingingly fresh.
They’re packed tight with grapefruit and lime zest, orange marmalade and steely green herbs all wrapped in a sticky pine resin jacket.
And all of is fun is blasted at you through a rich rum and raisin boozy heat that warms your chest as you head towards the fiercely dry bitter finish. 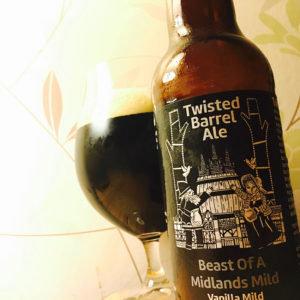 Beast Of A Midlands Mild (4.3%)
The fruity plum and toffee aroma of this little bottle of beer is lovely as you pour the deep purple brown liquid into your glass, its frothy cappuccino head popping with life.
The malting is thick and rich and gooey, all burned brown bread toast, black coffee and treacle tart, and there’s a good hit of pithy hedgerow greenery from the East Kent Golding and Saaz hops.
All this makes for a soft and comfortable beer with a sticky honey and spicy herbal finish.

Thanks to Ritchie and Carl for their time and for their beer.
Check out Twisted Barrel and, if you see some, drink it.
Brewery Photographs used with kind permission.

One Response to Twisted Barrel Ale: More Folk Than Punk