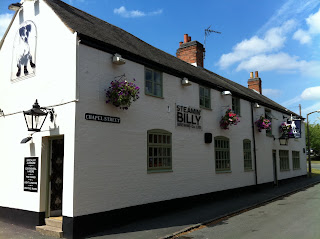 The first thing to drop onto my virtual doormat this-weekend was a membership card (virtual) for the CAMRGB.

I must say that I do like the notion of celebrating beer simply because of its gorgeousness, regardless of whether or not it ticks all the boxes of the hardened beer-buffs. I am myself usually too sozzled to remember anything of the provenance of a beer and the only detail that really interests me is the all-important ABV. And I do attempt to remember the names of those which particularly please me.

I quickly decided that it would be appropriate to mark this most auspicious of occasions by conducting some serious *ahem* research with a mind to contributing to the blog which serves as a mouthpiece to this most worthy of causes.

I love summer, and being English, I spend at least 11 months of every year longing for hot lazy days, during which I become more saurian than human. Perversely, though, there is nothing which I enjoy more than wasting one of these gloriously rare afternoons by sitting inside a dark pub drinking, well, too much.

It didn’t take too long for a plan to emerge (about 2 seconds) and after an agonisingly long wait for opening time to come around I found myself installed into the Dog And Gun, Syston, a small town to the north of Leicester. This fine old building has been a pub for centuries and has recently been converted to a ‘Real Ale’ pub by the Steaming Billy Brewing Company. This was a brave decision by the brewery considering that, due to its location, they will rely, to a large extent, on the existing local drinking population for much of its trade. They clearly believe that there is a desire for quality beer out there; Carling boys simply aren’t catered for at-all here.

Steaming Billy operate 6 pubs in which they showcase their own excellent beers as well as many others, although they do tend to favour local producers. The food on offer is locally produced too, and is sensible beer-drinker’s food; crisps, ploughman’s, pies and the like. They describe themselves as a ‘Classic Alehouse’ with a decor that is both ‘snazzy’ and olde-world in a well balanced way. I spent the first hour or so of my tenure sat in a winged armchair. Very pleasant.

The beer here speaks for itself and was being quaffed greedily and appreciatively by its many customers. I get the impression that Steaming Billy are keen to attract those of us who like a Bloody-Good-Pint but might be a little reluctant to venture into one of the sometimes slightly intimidating bastions of card-carrying CAMRA members. I heard a regular state that whilst he was ‘not really a real-ale drinker, the beer here is really nice.’ It seems to me that good beer is losing its image of fustiness and that the small breweries finally look set to shake the brewing giants’ grip on our pubs.

As I sampled my final pint of the afternoon the landlord said to me, ‘Its like a mini beer festival coming into here.’ I had to agree with him and burped happily as I tried to find the door and thus started on my long journey home.

All of the beers sampled were well kept, fresh-tasting and served with a smile. What’s more, I felt as fresh as a daisy the following day; another sign of a good pint. Highly recommended.

The Grainstore Brewery Rutland Panther 3.4% (Best of the day, and a Mild too!)

Founder of CAMRGB. Member of The British Guild Of Beer Writers. Leftist bigmouth. Old and grumpy.
View all posts by Simon Williams →
This entry was posted in Pub Review and tagged Dog and Gun, Pub Review, Steaming Billy, Syston. Bookmark the permalink.