This year at Glastonbury I made a pledge, ostensibly to the Somerest Wildlife Trust but mainly to myself, to drink more local ales. By this I intended to mean drinking ale bought as near as possible to where it was made. So when a long-awaited trip to Scotland came around at the end of July, it seemed the perfect opportunity to put my pledge into some serious action.

So, day 1 and a brief stay at a Premier Inn at Dumfries. Not the perfect start, as the only ale on offer was Belhaven, an Edinburgh beer. I’d had this before, but only in my local when we had a Scottish landlord. He also used to stock Deuchars, which was teasingly present on the pumps in the Premier Inn but not in the pipes. Belhaven it was then, and what I would come to consider as the John Smiths of Scottish beers – ubiquitous, creamy and cold. It would do for now, but it would soon become the beer of last resort. 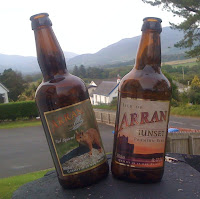 Arriving at Arran for a two-night stay, Belhaven was the only ale on offer in our hotel. However, brighter times were ahead at our friend’s party, which had bottles of Arran Brewery ales. We’d sampled these on the ferry en route and been impressed with the Blonde and Arran Ale – both fine, light beers for a sunny trip on deck. At the party there was darker fare – the appropriately nutty Red Squirrel, sales of which also help with funding the preservation of this beautiful animal. 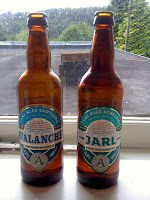 Back on the mainland (after a brief stop to buy some Arran single malt whisky, a splendid smooth and smoky taste) and on to Loch Fyne, and the discovery of the Fyne Ales brewery shop. Here we were greeted by a friendly lady who gave us generous samples to taste. Impressed enough to buy a 12-bottle crate of mixed ales, including the light, grapefruit tinged Avalanche and dark, zingy Vital Spark. Happily the George Hotel in Inverary served Fyne ales too, to accompany the evening meal. 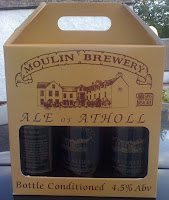 Over to Pitlochry and a visit to the Moulin Hotel and micro-brewery. The brewery here mainly serves in their own hotel and selected venues in Pitlochry, so is a rare treat. Four ales were on offer, the highlight being a smokey, chocolatey Old Remedial, though the Braveheart and Moulin Light were also good, hoppy drinks. A nice little three-bottle presentation case was of course purchased as a souvenir.
In the evening we ate at the Auld Smiddy, which served up the gloriously named Thrappledouser from the Inveralmond Brewery of Perth. The Auld Smiddy usually has one of the Inveralmond ales on, so is worth a visit if you’re in the area – the pork belly is delicious too, and a perfect accompaniment to the light, fruity Thrappledouser. 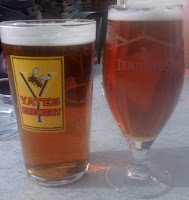 Finally we stayed over in the Lake District to break up the journey home. While at Buttermere we sampled Yates Bitter and Hawkshead Cumberland Gold. The Yates is a CAMRA prize winner, though I found it a little bland compared to the punchier Hawkshead. However, Yates was the more local ale of the two so I was happy enough to support them.
Of course, it wasn’t just a beer tour, though the pleasure of discovering and tasting a range of interesting, locally produced ales brought an extra dimension to a highly enjoyable week’s holiday. My pledge is well on track.