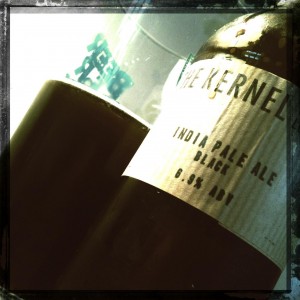 Like so many of the beers coming out of The Kernel Brewery, this is a really clever bottle of beer.

Everyone seems to be dabbling in Black IPA’s at the moment and all with varying degrees of success.

This beer pours like a porter and on first inspection it is tinged with whisky and porter smoke.
But then there are massive doses of wine gums followed by intense bitter chocolate and a super long dry bitter hop finish.

The Kernel just keep on giving.

Founder of CAMRGB. Member of The British Guild Of Beer Writers. Leftist bigmouth. Old and grumpy.
View all posts by Simon Williams →
This entry was posted in Beer Review and tagged Beer, black, IPA, kernel. Bookmark the permalink.