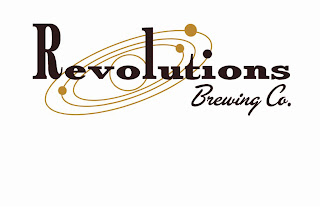 A little nepotistic maybe, but Revolutions Brewing Co. are tremendous beer-makers as well as friends in the real world.
I’ll let them introduce themselves.

Hello, could you please introduce yourselves.
We are Andrew Helm and Mark Seaman and tonight, Matthew, we’re going to be The Revolutions Brewing Company.

What was the moment that made you think, “I know what we’ll do. We’ll brew beer.”?
Andrew: I’ve been homebrewing for over 20 years and moved on to all-grain brewing about 4 years ago. Put myself through the 3-day BrewLab course in Sunderland (birthplace of my father so there must be something fatalistic about it) in 2007 to find out more about the commercial side of micro-brewing and to learn how to improve my homebrew. Put things on the back-burner until last summer when a combination of push (consultancy business squeezed) and pull (light-bulb moment about how to theme a brewery around my other passion – music) kicked things off. Hooked up with Mark, who I’d met in 2009 at a business seminar and we developed the ideas through the late summer and early autumn of 2010 to a launch in November 2010.

Mark: I lived and worked in Bahrain for 14 years, with a distinct lack of access to decent beer – I’ve had my share of Heineken, Amstel, Singha and Kingfisher! On returning in 2008 I was toying with the idea of a microbrewery independently. After I met Andrew, a few other issues conspired to remind me that life is short and that you regret the things you don’t do, rather than those you do, so I did not take much persuading to dive headlong into it. 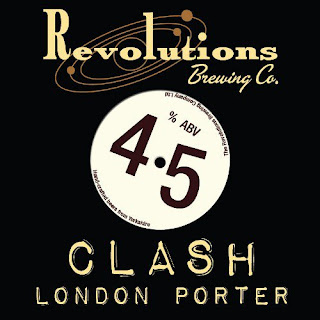 You’re making beers that accompany music or are influenced by music you like. How different are your musical tastes and is there any arm-wrestling that goes on when one of you has an idea? I mean, what would happen if one of you said, “Let’s do a Yes style concept beer that has to be enjoyed over several pints”?
Andrew: Interestingly our historical tastes are subtly different but with quite a bit of overlap. The music I was really into in the post-punk/new-wave era was electronic and synth-pop (Heaven 17/Thomas Dolby/OMD etc) but I also liked the more guitar-based stuff around that time. I think now our contemporary music tastes are quite different! Can probably be summarised as me liking stuff in minor-keys and Mark liking major-keys!! A Yes concept beer ain’t gonna happen – our year zero is 1978. We’ve started referencing albums from 33 years ago i.e. 1978 and it’s a pretty fertile period for music. We’ve so far done a Parallel Lines beer and have just launched an Elvis Costello special called This Year’s Model. We have one, maybe two, classic album brews coming before the end of the year.

Mark: I’m just a few years older than Andrew (old enough to have bought Yes albums with my paper round money!) – Back in ’78, “year zero”, I was heading for college with ears full of The Clash, The Stranglers and my favourite band then or since probably, Siouxsie and the Banshees. Fortunately I haven’t got stuck in any era and enjoy contemporary music. As Andrew says, our contemporary tastes are a little different, though there is plenty we both appreciate – hurrah for Interpol, Richard Hawley and The XX!

With regard to ideas / beer names etc. it has to be consensus, luckily we’ve found plenty of common ground, so no problems so far. We’re actually very happy with our core range names, I mean “Clash London Porter”, what’s not to like?

Hopefully people will enjoy seeing what new ideas we come up with, we’re excited about the 33rd anniversary stuff, This Year’s Model is just being delivered to pubs. The next one in a couple of months will be fun too – look at 1978 album lists for clues as to what it will be! 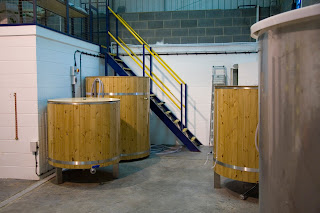 Where are you brewing? How big is the operation now?
Andrew: We’ve recently commissioned a 8BBL plant near Castleford, West Yorkshire. We’re brewing once a week at the moment but expect to have doubled that before the end of our first year. We have 5 core beers at the moment with plans for a couple more. With those on rotation in the brew cycle we will probably do a special around 8 times a year and we’d expect those to be references to classic albums, brews to tie in with album launches or whatever collaborations we come across along the way. We have a very exciting collaboration in October which I’m not yet at liberty to divulge but keep an eye on our blog pages and website for more details.

We’re inviting people (via our Facebook page) to name one of our fermenting vessels after an 80s Leeds band. I hope your readers will visit our page and vote!

Mark: Why did we pick Castleford? Competitive rents, no existing brewery, one of the country’s finest maltsters is there, excellent transport links, it’s about halfway between our homes in Leeds and Selby – all those things are relevant. We also became attached to Castleford after our first serious meetings on the brewery idea were held in the town’s Shoulder of Mutton, a place for anyone who appreciates what a traditional pub could and should be. 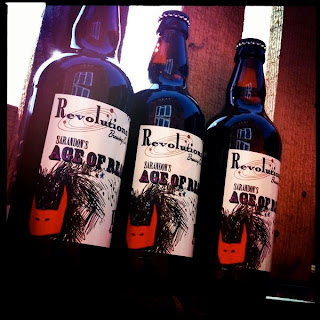 You recently did your first bottled beer for an album launch. Will there be more bottled beers coming our way?
Andrew: The bottled beer we did for Sarandon’s Age of Reason album launch was a good experience for us to understand the economics of bottling. We do want to have a permanent bottled product and the two future core beers we have in mind probably lend themselves to bottling more so than the existing five beers so watch this space.

Mark: We definitely want to offer a bottled range and continue to research the best way to go about it to ensure commercial viability. This is likely to be a project for early next year.

How do you see the future shaping up for Revolutions Brewing Co.?
Andrew: Ultimately we will be judged on the quality of our beer. If we get that right then I think we will attract people to us who share our love of beer and music and then who knows what will happen. There are so many doors that might open that it makes the whole business really exciting.

Mark: Absolutely, it has to be about the beer. So far, so good on that count. But realistically we have only done 6 brews on the Castleford plant. When we achieve consistent quality over 60 or even 600 brews we can be happy. The music tie-ins are the fun part – fun for us and fun for our customers – but it is all under-pinned by tasty beer. Hopefully the readers will seek our beers out at pubs, clubs and beer festivals – if you do, let us know what you think!