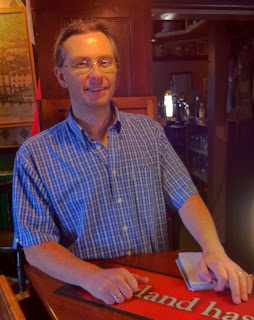 This charming man is called Paul. Alongside his wife Sue he owns and operates the wonderfully unmodernised The Mushroom Hall public house in Albert Village in the heart of The National Forest. Luckily, for Paul and Sue, theirs is the only pub in the village. Luckily, for the people of Albert Village though, Paul likes his beer.

When we popped in this lunchtime he was quite excited to announce his latest arrival; Samuel Smith’s Pure Brewed Lager. I can sense some of you already losing interest at the very mention of lager, and understandably so. If it were not for Paul’s enthusiasm I would have gone straight for the immaculately kept Pedigree or perused the pumps to see which guest beers there were on offer. But a sample was in my hands within seconds. A moment later I am reconsidering my plans for the day and wondering if I can get away with staying there all day and drinking the stuff in very large quantities.

At 5% it becomes a ‘Premium Lager’, and so it has to compete with the Stella’s and Kronenburg’s on the market (interestingly, at £2.50 a pint Paul has found it shunned by some hardened lager-boys as being some cheap and inferior pretender!)
But this massively quaffable and delightful drink really shouldn’t be considered alongside the standard and mainstream Euro-fizz with which it shares its name.
The 5% ABV delivers the alcoholic bite at just the right level to perfectly compliment everything else going on in this well balanced brew. The malt is playfully light and only a little sweet. The hops are fresh and understated, imparting a fruity bitterness which doesn’t dominate the palate. I’m sure that even the yeast adds to its flavour. I was even aware of the quality of the water used in its production.

In short, I have fallen in love again and I am hastily re-arranging next weekend’s plans in order for us to spend as much time as possible together. It’s a lovely pint, it’s a lovely pub.

The Mushroom Hall is not too far from Burton, Leicester, Derby or Nottingham and is definitely worth seeking out. Call them on 01283 217464 if you’re lost.