A Brace Of Beers From The Heart Of Shropshire

My heart belongs to Shropshire.
Though I spent much of my early years on the other side of the world, my family are from there and I lived there from the age of eight until 24.
I feel like I’m home every time I  pass the County line on my way along the A5 to my folks’ house.
It’s where my favourite pub is.
It is also home to the Salopian Brewery.

“Salopian Brewery was established at an Old Dairy on the outskirts of the mediaeval town of Shrewsbury in 1995, the plant having been moved from Snowdonia brewery in North Wales. It was then reckoned to have the second smallest brew length in the country for a brewery not attached to a Pub.” – From the Brewery’s own website 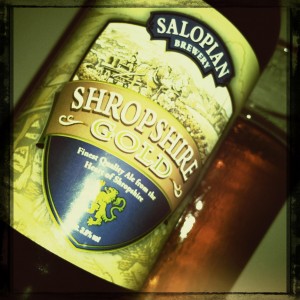 The brewery do a range of beers but they have two well known standards, both of which are delicious bottled ales.

Shropshire Gold (3.8%) Is a delightful golden session ale. Full of fruity hedgerow aromas, the beer sits pale and golden in the glass. From the first mouthful you are given lovely digestive biscuit malt, soft sugary raisins, hints of apples and lemons and a gentle but long lasting hop finish.

The flagship beer of the brewery is probably Salopian’s Darwin’s Origin (4.3%). As I and my classmates were constantly reminded at school, Darwin was a local lad, born in Shrewsbury. He was bound to have a beer named after him.
And the beer he gets is excellent. 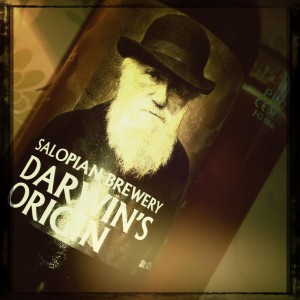 Coming on almost like an IPA this beer is all woody hazelnuts and hints of coffee grounds before a sweet caramel body fills your palate.
Hiding away in the background there’s a feint hint of blue cheese, ground white pepper, a whisp of pine resin and the astringency of fresh tomato plants.
If that isn’t enough for you there’s the long crisp bitter finish like a big fat hoppy kiss.

If you’ve not tried any beer from this brewery I suggest you do.
Shropshire is where I’m from and these beers are a taste of my home.