Broken By Homebrew in Doncaster

Yesterday I travelled up to Yorkshire.

It was supposed to be a mix of business and pleasure.
I had to discuss artwork and promotion for my friend and fellow band member’s new solo album, I wanted to talk with him about CAMRGB and get his thoughts on how to progress and I felt I should be trying the beer he’s making in his tiny micro-brewery in his outbuildings. 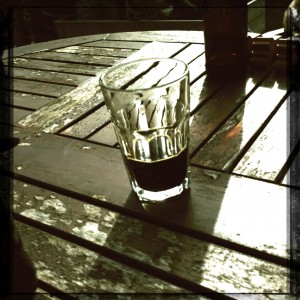 I arrived late afternoon in glorious sunshine and was met at the door by a man holding a bottle of home brewed stout.
The beer was delicious.
Slightly chilled, it had a lovely round chocolate rich malt and a nice spike of hops at the end.
We caught up on news and had a second bottle.
After being shown around the vegetable patches we talked a little about The Campaign For Really Good Beer and came to some conclusions about how I should go about administrating this ever growing beast.
All the while I watched my comrade prepare a delicious curry for that evening. 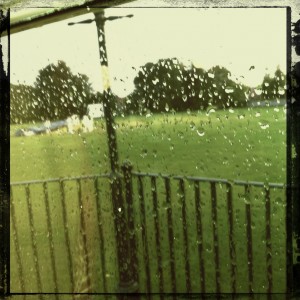 After the food was prepared we popped out to the local pub.
Situated approximately 50 yards from my friend’s front door, The Ivanhoe is a Samuel Smith’s public house.
It’s enormous and sprawling and sadly has been a little neglected, but I’m told the new Landlord has plans to renovate.

We sat in the conservatory and watched Yorkshire Cricket.
Yorkshire cricket is predominantly played in the rain. 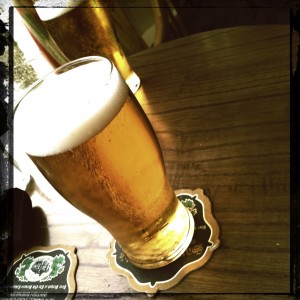 We followed the Cask with a pint of “Taddy” Lager (4.5%).
Initially it seemed a little over-carbonated but as the bubbles died down we agreed it had the depth of a decent golden ale whilst retaining a lovely crisp lemon zest bite.

After this we popped back home to eat.
With our curry we enjoyed a home brewed brown ale.
This was a deep red, full of plum and toffee and lots and lots of lovely lively hops. 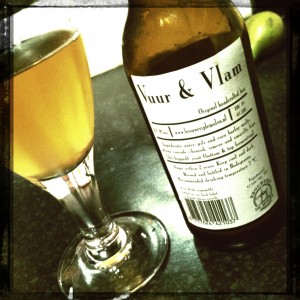 The food finished we opened a couple of beers I had taken up for my friend to try.
The first was a Brouwerij De Molen Vuur & Vlam (6.2%).
Full of enormous green limes and pungent flowers, this beer did nothing more than convince me further of my love for the brewers at De Molen.
We followed this with a rather hefty Vertigo “VF” (9.8%) by Hopshackle.
This beer is a monster.
It’s single hopped to and brewed to within an inch of its life and it makes for a huge, intense, bully of a beer.
Thick and viscous and deeply fruity – It kicked like a sherry fuelled donkey.
Lovely. 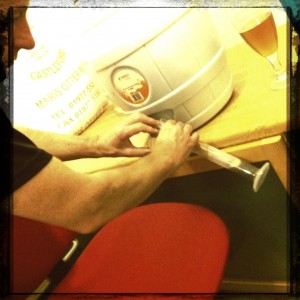 Finally we retired to the outbuildings and I was first given a tour of the brewery.
We tasted delicious dark malts and stuck our faces in bags of hops.
While we did this we drank a bottle of Revolutions Brewing’s Sarandon’s Age Of Reason (4.5%).
This beer was created by the men at Revolutions to celebrate my band’s last album (and yes, it predates Elbow’s beer pop pickers).
AoR is a lovely IPA with toffee and raisin backbone and a head-full of hoppy madness.

We drank this listening to my comrade’s new album and discussed plans for how it should look and how it’ll be promoted. 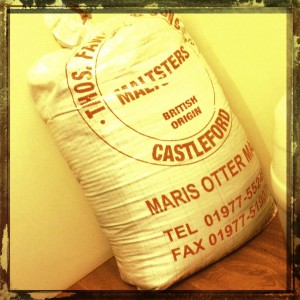 Eventually we ran out of steam.
And beer.
And retired to bed.
Separately of course.

This morning after a belly full of coffee and a delicious sandwich made with local bacon I made the drive home.

A lovely weekend full of ideas and music and politics and laughter and REALLY GOOD BEER.