The Hopshackle Brewery, based in Market Deeping, makes some of the most astonishing beers being produced in the UK right now.
I got the chance to ask them a few questions and this is the result. 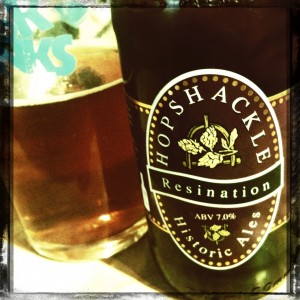 Hello, could you please introduce yourselves.
My name is Nigel Wright aka Mr Hopshackle.

How, why and when did Hopshackle begin?
Before I started Hopshackle I had been homebrewing for about 30 years and for the last 10 of those making commercial styles of beer using all the correct ingredients and yeast strains. I was encouraged to do the “Start Brewing Course” at Sunderland University by friends and family to find out if I really wanted to brew commercially. I decided to take the plunge and the first brew was made at Hopshackle on 9th. November 2006.

Your beers hint at the traditional but have that enormous kick of a modern heavily hopped ale. How do your recipes begin life?
The intention when I started was to produce beers based on traditional/historical English recipes which sadly were no longer available, but also to push the boundaries of these historical recipes and styles and make new innovative, distinctive beers for the modern drinker.
I do a range of beer styles from Historical Porter 4.8% (based on an 1850 recipe) and Imperial Stout 9.3% (based on Courage Imperial Stout), to wacky heavily hopped beers such as Resination 7.0% and Vertigo VC 9.8% and VF 9.8% (inspired by some of the great modern USA brewers!) 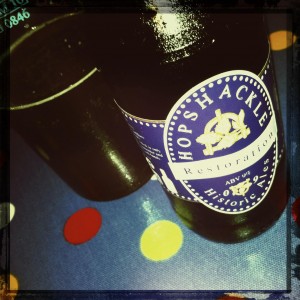 The name Hopshackle is old English, right? Can you explain a bit?
I first came across the word “Hopshackle” on the TV programme “Call My Bluff”. It is a very old English word which is found in the full Oxford English Dictionary (not the concise version!)
The transitive verb is “to walk with an uneven or unsteady gate” – I thought that was pretty appropriate!

Where are you brewing and what capacity do you have?
I am brewing in an industrial unit in Market Deeping on the Cambridgeshire/Lincolnshire border.
The brewery was made at Charles Wells “Eagle Brewery” near Bedford and I bought it through a third party from Thomas Wells. The working capacity is 4.3 brewer’s barrels and I get 140 gallons of finished beer at a time 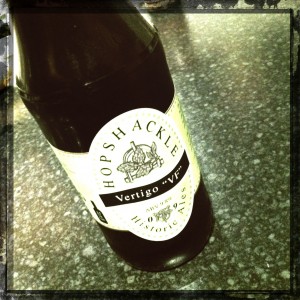 What are the plans for the future?
Plans for the future are to keep on making innovative beers but keeping an eye on the traditional.
The latest project is to make a traditional well balanced English Bitter which is malty-fruity with just enough bitterness to balance it all off.
The first version will be ready in about 2 weeks – everything crossed!

I urge everyone to hunt down and try some of Nigel’s beer creations.
They are both incredibly innovative and very very British.

Founder of CAMRGB. Member of The British Guild Of Beer Writers. Leftist bigmouth. Old and grumpy.
View all posts by Simon Williams →
This entry was posted in Brewery, CAMRGB, Interview and tagged bottled beer, Brewery Interview, Hopshackle. Bookmark the permalink.