Four Of The Best From Fyne Ales 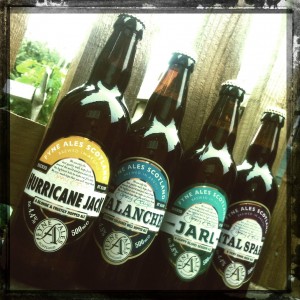 I discovered the beers being produced by Fyne Ales after a friend and fellow blogger spent a week in Scotland and came back telling tall tales of wonderful beers in fabulous locations.
Fyne Ales were set up in 2001 and are based in an old milking parlour surrounded by breathtaking countryside at the head of Loch Fyne in Argyll.
Within a year of brewing Fyne had won a SIBA award and by 2003 had taken both a Silver and Bronze medal in the National Championships.
According to the brewery’s website they supply five local pubs – all of which, from the photographs, look like beautiful places to be – and they sell their beers bottled from their online store.
Which is where I come in.

Fyne Ales four main bottled beers are all distinctly different and yet share something in common.
This is what I made of them. 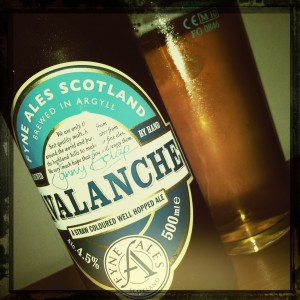 Avalanche (4.5%)
As the bottle cracks open you are given delightful elderflower aromas.
The beer pours light and golden with a visible fizz.
The flavours are intricate with green, woody hedgerow bitterness, hints of lemongrass, and all underpinned with a fine caramel malt backbone.
Just when you think it’s all over there’s exceptional sharpness at the finish. 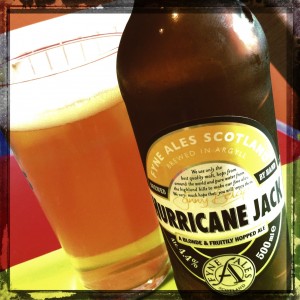 Hurricane Jack (4.4%)
A terrific blonde beer.
This is all about soft summery fruits.
There’s a creamy malt underbelly with burned sugars and ripe berries which give a the beer a mellow roundness.
But then the really zippy citrus hops stop you short and leave you with a delicious dry bitter hop finish that stretches off into the distance. 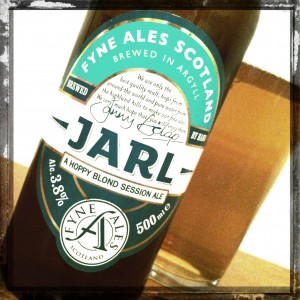 Jarl (3.8%)
Given the low ABV this is an astonishingly full flavoured beer.
I must admit that most of the time these days I expect high alcohol with a beer this flavoursome and so I was expecting something very light and palatable, boring almost.
Instead I was hit in the face by really intense grapefruit and lemon zest.
This was followed by a lovely swirl of caramel and big, big elderflower hop bitterness to finish.
All this and still it remains light and lovely.
Wow. 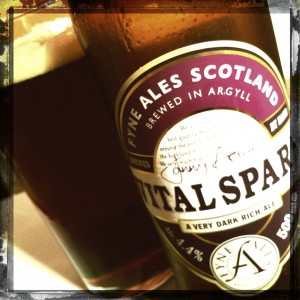 Vital Spark (4.4%)
Not entirely sure where this beer sits – Is it a stout? Is it a mild?
It certainly has all the requisite flavour combinations for a stout, but at 4.4% it’s really very light.
And yet the beer goes into the glass with the depth of Bovril, all brown and gloopy and good for you.
There are overwhelming smells of chocolate & plums.
The flavour is complex – All dark rum laced malted biscuit, round and slightly smokey fruits, and then to cleanse your palate and leave you puckered for more you get a superb dry, bitter, cleansing hop to finish.

So there you have it.

Four fantastic beers from a brewer tucked away in the wilds of Scotland.
Four rather different beers that share some important similarities.
Each beer delivers a lightness of touch, a genuine quality to the finishes, that make all four of these beers really rather good.