Posted on September 4, 2011 by Simon Williams 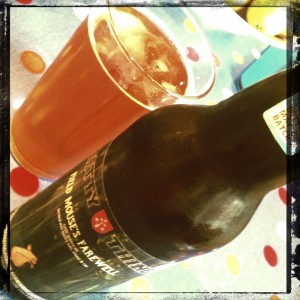 Pretty Things call themselves a Beer & Ale Project rather than a brewer.

That might sound a little pretentious, but when you take a look at their website and at the beer labelling it’s more to do with a kinship to a lost America.
An America of the 60’s underground, the America of Richard Brautigan’s “Trout Fishing In America” or Tom Wolfe’s “Electric Kool Aid Acid Test”.
At least that’s how I see it.

So, Pretty Things are a couple of UK ex-pats making beer in Massachusetts.
But this isn’t just beer.
This is beer as artform.
From the 600ml bottle through to the labelling, this is a work of love and dedication.

I opened the bottle to a sweet aroma and was met by a beautiful golden orange beer with just the perfect zippy fizz in the glass.
The first mouthful was intense raisins and apples underscored with burned caramel and biscuit.
Then there’s a clean watermelon smoothness  and light grapefruit bite.
The mix of grains adds a tremendous depth to the flavour – that delicious maltiness of Weetabix before it goes soggy, with hints of black pepper and coriander.
The wheat in the mix gives a terrific roundness and viscosity before the kick of bitter hops sits on your palate like a friendly house guest who doesn’t want to leave.
Like eating your favourite sweets as a child I wanted this to go on forever.

Be warned, this beer is a bit pricey.
But it’s definitely worth every penny.

Founder of CAMRGB. Member of The British Guild Of Beer Writers. Leftist bigmouth. Old and grumpy.
View all posts by Simon Williams →
This entry was posted in Beer Review and tagged Beer, CAMRGB, Drinking. Bookmark the permalink.