Yet another beer from Sainsbury’s so-far-so-good-except-Full-Bore Great British Beer Hunt.
I have to say I’m continuing to be impressed by the width of the range that this supermarket giant has put on its shelves. 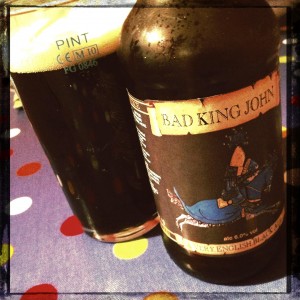 So, the beer.
Bad King John is big and bold and strong.
A really terrific stout, this beer is deep and chocolatey and full of coffee infused malts.
There are gratifying earthy, woody notes, a fireside smokiness and charcoal bitter hops.
I’ll be buying more of this.
Excellent.

Postscript: As mentioned at the top of this piece all the beers have, so far, been excellent in this range.
All except Full Bore.
I rarely waste a beer, but the cloyingly sticky sweetness of the beer (it’s brewed with honey AND golden syrup) had me pouring it down the sink after two or three mouthfuls.