St Peter’s and the Jerusalem Tavern

Just a quick word up, as they say in Bracknell, for St Peter’s.  I’d had the Organic Pale Ale before (they sell it in Sainsbury’s, and it’s in a lovely oval-shaped bottle), so imagine my joy when I find myself meeting up with friends before a gig at the Jerusalem Tavern in dizzy old Clerkenwell.  Are you imagining it?  Good.  I like people with imagination. 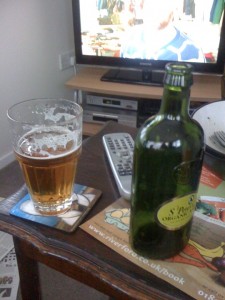 At Home With A St Peter's OPA

Anyway, turns out this pub is the Stammpub of St Peter’s Brewery.  At my first visit to the bar I was pleasantly surprised to see the OPA on tap, respect I thought, until I looked behind the bar at the array of other St Peter’s ales on sale.  Respect seemed an inadequate word.

Having downed the OPA at typical pre-gig drinking speed, I was offered a top-up.  “Surprise me”, I said.  To say I was not merely surprised, but mightily smacked of the gob, was an understatement of the highest order.  (Get me, litotes and hyperbole in the same thought, grammar fans.)

As you’re imaginative folks, posit this.  A pint of finest light brown ale.  With a shot of the smokiest, woodiest 12-year old single malt – a Laphroaig perhaps, or an Ardbeg – thrown into it like it was a Jagerbomb.  That’s your Suffolk Smokey for you right there.  The immediate raction is to recoil in shock, horror, revulsion even – but a few sips reveals a very lush, woody taste.  It’s one of those drinks that you start off wondering if you’re going to be able to finish it, and ending up wishing you didn’t have to leave because you want another one.

I would heartily recommend a visit to the Jerusalem Tavern whenever you’re up That London way.  I’ll be back for sure, there’s loads more taps I haven’t tried yet, for starters, and next time I want a pork pie too.

2 Responses to St Peter’s and the Jerusalem Tavern