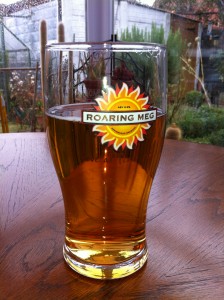 I’m not a beer reviewer. No, I’m more of an epicurean and an opinionated piss-head.

What I’d like to write about today has nothing to do with food-matching or Gooldenesque tasting notes, but beer’s other properties, the simple fact that Beer Is Magical. I think we would all go along with that.

But let me explain myself. Beer, I believe, has synergistic properties with something very special emerging from the interaction of malted barley, water and hops. Beer has alchemical qualities too with nothing greater than base materials born of this world enabling ordinary men and women a glimpse of heaven. OK I know not all of us sit there having ecstatic and beatific visions after a glass or two of stout but many of us undergo a very real transformation once we have had a drop. We cease to be grumpy and cantankerous, uptight and quarrelsome. Instead, us beer drinkers become charming and affable. We turn into sages and lovers. We become lovable and ridiculously amusing too. In short beer has a undeniably civilising effect on humanity.

If Bill had been alive today he would have railed against the corporate high-jacking of the internet (well, the proliferation of porn might have distracted him a little . . ) and the spoiling of the world’s greatest ever resource for information, proliferatiion of knowledge and understanding. I myself feel personally affronted by the constant barrage of ‘buy me, buy me, buy me’ whenever I tap into this wonderful resource. On Twitter my finger hovers over the Unfollow button ready to banish those who cross the line of acceptable self-promotion out of my timeline. If you mention Xfactor and you’re gone too. Twitter is great though, its a fabulous way of connecting with like-minded people, but it is already the playground of spam-bots and yet another demonic tool of the marketing exec.

Earlier this week on Twitter I had a message from @Springhead1 announcing that as I had become their 300th follower I was eligible for a prize and that if I were to send them my home address they would ship it out to me. My finger hovered over the Unfollow button in cinematic slow-motion as the word ‘beer?’ formed in my mind. ‘Who were these people?’, I thought, and instead clicked on their website. They were indeed brewers and like the little whore that I am I dutifully sent them my address. I had compromised my beliefs, I had betrayed Bill. For beer.

Sure enough, the parcel arrived and to my delight it contained two bottles of Roaring Meg and a very lovely glass. I have been drinking it today and all I have to say is that it is that Meg is a very comely wench and that I really love Springhead Brewery. I wholeheartedly suggest, nay, insist that you all follow them and any other brewery that you can find. Sorry Bill, its the beer.

3 Responses to Beer Is Magic