Quartz are a new brewer to me.
Based in Kings Bromley in rural Staffordshire, Quartz Brewing is an independant, family owned microbrewery.
It was originally set up in 2005 by Scott Barnett – a brewing engineer and partner Julia Barnett – master brewer.
The core range of beers look interesting and the brewery is well branded, though I’m not too sure of a couple of the beer’s names if I’m honest (and being super-critical).
Crystal and Heart conjure up New Age whispiness in my brain. 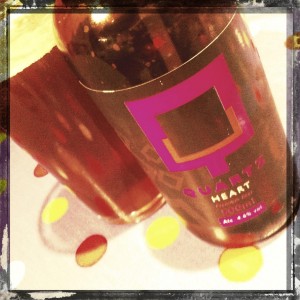 I had a bottle of Heart and this is what I thought.
The beer pours a deep, satisfying chestnut brown with just enough head to look pretty in the glass.
The first mouthful is filled with a lovely malted biscuit and hazelnut body.
There’s hints of hedgerow berries before a decent bitter finish that makes you want another one.
So I shall definitely be trying another one.

Quartz are a brewer to be looking out for.