On Monday morning I paid a visit to the Salopian Brewery in Shrewsbury.
I was met by Jake who gave me an interesting tour of the place just as they were mashing in a fresh brew of Shropshire Gold.
Unfortunately a combination of it being early morning after the night before and excitement at watching beery magic unfold I didn’t take any photographs, so you’ll have to believe me when I tell you that the brewer rode a pink elephant to reach the lid of the mash tun (he didn’t really).
After the tour we settled down in the kitchen to have a chat over a cup of tea about all things beer.
Prior to working with Salopian Jake was at Oakham and from what he told me he brought some of the spirit of that brewery with him to Shrewsbury. 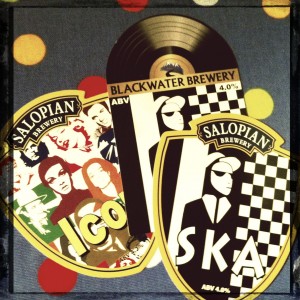 Alongside the Salopian brand, the company now also brew under the name Blackwater Brewery which allows them a space to experiment with less traditional beers and with new ranges.
Some of these then find their way into seasonal editions. There have been music and arts related lines and the latest, called Icon, which were brewed with famous faces in mind.

We finished our tea and said our goodbyes, promising to meet up for a proper pint next time I’m over that way. On leaving I was handed a couple of bottles of Salopian’s Oracle (4%). 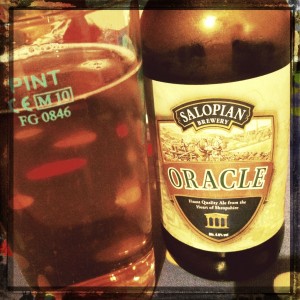 I put a bottle in the fridge as soon as I was home and counted the minutes down until beer o’clock when I could try this new Salopian bottled brew.
It was worth the wait too.
This is a delicious modern beer that’s full of the deep flavours associated with a brilliant brewer – All the knowledge of traditional brewing that has gone into this beer bring out the most wonderful flavours.
First there’s a delicious sparkly aroma, all zingy fizzbombs and open meadows.
Hiding underneath with broad shoulders are chunky biscuit malts that fill your mouth before the smack of citrus rinds rinses your palate, leaving you a long, clear, dry finish.
Terrific beer.
Thanks to Jake and the gang at Salopian for showing such hospitality.
The first round’s on me next time I’m over.

One Response to Salopian Brewery Oracle (4%)