Wadworth brew in Devizes (just 20 miles from my home) and have been doing so since 1875. They have a core range of five beers complimented by six seasonals and the occasional one-off brew. Their most well-known beer is 6X – it is pleasant enough but, to my taste buds, nothing special.
In the autumn they blend 6X with Pussers Rum to create Swordfish – my favourite Wadworth beer.

Back in the summer, they launched a new range of five beers: The Beer Kitchen, which carried the proud claim of being “hand crafted fine artisan beers”.

Living in Swindon I quite often eat in Wadworth pubs (mostly the Waggon & Horses near Avebury) and since I first read about the launch of the Beer Kitchen range I have been eagerly awaiting their arrival. Initially I’d just have a look in the fridges and on the shelves but when it was quite clear they weren’t turning up I began to ask the bar staff and landlords if they were planning to stock the range – sadly, the vast majority of them hadn’t even heard of its existence.
Thankfully, the landlady of the Waggon & Horses had heard of the range and although she didn’t have immediate plans to stock it, it was something she’d consider in the future. She also told me that the beers were definitely on sale in the Wadworth brewery shop in Devizes.
So that’s where I went

The five beers come in 330ml bottles and cost £4 each. I often pay two or three times that much for a bottle of beer but I appreciate that they might seem expensive to those who are more used to paying approximately £3 for a pint or a 500ml bottle, which is possibly why the beers have yet to make an appearance in (m)any pubs but overall I would say they are reasonably priced. 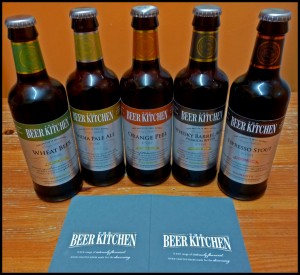 WHEAT BEER (5%)
The nose: Washing-up liquid and green grass, faint tang of lemon and coriander, a subtle whiff of red liquorice.
The taste: Lager blended with fruit salad chews complimented by a drop of washing-up liquid followed by a slightly floral metallic aftertaste, it departs with a nice burst of green spice & citrus bubbles upon the tongue.
I’m not a fan of wheat beer and this one hasn’t done much to change that but it is a lot better than the majority I’ve tried and if someone offered me one I would accept it, which I certainly couldn’t say about the more well-known brands of Hoegaarden, Erdinger and Blue Moon.

IPA (6.2%)
Nose: Initial burst of toffee crumble ice lolly quickly overtaken over by an inviting blend of melon,  grapefruit and a springtime washing line, underpinned by the scent of dusty library.
Taste: Pleasant mix of apples and brown bread followed by a passing glance of lime marmalade, dry and musky when swallowed but a reasonable hop kick does shine through.
I love IPA but I must confess that I far prefer the American styles that are starting to appear more frequently in the UK. However, this is certainly a good beer and if it made it to keg then it would become one of my most frequently ordered drinks when in Wadworth pubs.

ORANGE PEEL BEER (6%)
Nose: Surprisingly flat with nothing much going on…faint touch of marmalade and digestive biscuits and a slight suggestion that someone has spilled some Cointreau on the carpet and not bothered to clean it properly.
Taste: Strange little number this. The orange peel doesn’t seem to have a starring role – almost like malt loaf but not quiet, more like a big chunk of homemade granary bread glazed with bitter caramel which then gives way to a toffee apple finish.
In some respects this was the beer I was most intrigued by as the brewer’s notes claim it is “in a category of its own”. I think initially it was a little too cold as the flavour began to open up as the beer’s temperature increased. I need to have another bottle or two before I can make a full and proper assessment.

WHISKY BARREL AGED BITTER (5.8%)
Nose: Hot buttery toast with a thin spreading of damson jam, vanilla pods, a quick puff of cigar.
Taste: Lovely taste of melting butter and caramel raisins with a very slight smoky whisky taste.
This is quite special and worth seeking out. A nice after-dinner whisky for those who don’t like whisky. I’d like to see this offered for sale direct from the wooden casks.

ESPRESSO STOUT (5.5%)
Nose: Used coffee grounds, wet dirt, vodka & flat coke, cooking chocolate.
Taste: A strong earthy vibe and a pronounced coffee taste, much like when a few of the coffee grounds have ended up in your cup and you’ve unwittingly sloshed them into your mouth.
As bizarre as it may sound, I think this would work warmed up and served as a beverage alongside bacon and eggs etc… next bottle I get, that’s what I’ll do. Like the previous beer, I would like to have this served from a cask as I’m not sure it benefits from being slightly carbonated. All-in-all a very good beer and a perfect end to the taste test

In summary, I will drink these beers again (even the wheat) – I’d like to give them a go paired them with the food suggested by the brewer. I think the five beers are good enough to be appreciated by those who drink the more complex beers created by brewers such as Mikkeller, Odell and Kernel but they are also restrained enough that people who are happy with a pint of 6X or London Pride will still find them easy enough to drink.
Go try them.

Currently the Beer Kitchen range is not for sale on Wadworth’s website.

3 Responses to The Beer Kitchen