This weekend I went over to Shropshire to visit family and friends.
Beer was always going to be involved.
This is what happened.

I drove over on Friday to find more fighting talk left in the comments to one of the blogs on this website, answered the questions, spent the evening with my family and relaxed.
The weekend really began on Saturday when at lunchtime I dropped in to the new Wetherspoons that has opened in Wellington, Telford.
It’s called  The William Withering, named after a Wellington born Botanist who described digitalis.
I’m not sure that’s the best name to choose for a pub but never mind.
Inside, the pub does exactly what you expect a Wetherspoons to do – It’s comfortable and clean and the beer is kept reasonably well. 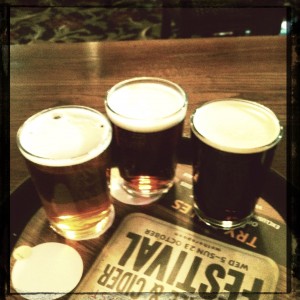 I opted for a pint made up of three schooners of beer – That’s three little 1/3 pint glasses (I didn’t know either. You learn something new every day).
It was a great way of trying a bunch of beer and staying sober enough to drive home.
I opted for The Stone Brewing San Diego Session IPA (4.5%) which was decent but not mind blowing, the Kalamazoo Black Silk (4%) which was disappointingly lifeless and in no way silky, and the Vale Brewing Long Dark Nights (4.3%) which was a delicious blend of rich red malts and crisp, dry hops.
Reading the posters and beer mats printed for this latest “festival”, I was interested to see the American brewers all being called Craft Ale Brewers.
And here was me (and everyone else) calling them craft beer brewers for the last god knows how long.
I wonder who decided on that?!? 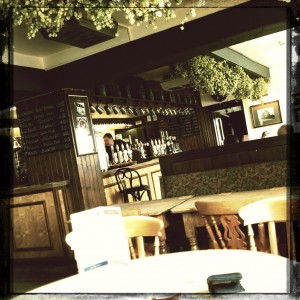 After driving back to my family home I popped over to The Wrekin Tap (it’s inside The Cock Hotel) for a quick pint and a chat with the landlord.
He wasn’t there.
His partner in crime was though, and we had a chat while I drank the best beer of the whole weekend – Hobson’s Dark Mild (3.2%) is warm and dark and mysterious and not unlike being smothered in melted chocolate digestive biscuits full of booze.
Delicious.
I finished up, left some CAMRGB flyers to be displayed next to the other brochures and went home.

Saturday evening I was due to meet a couple of old friends in the same pub. 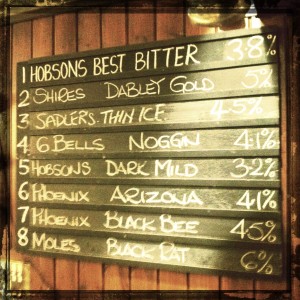 I popped over early so that I could grab a decent position, took a good look at the evening’s menu and plumped to start with a Phoenix Arizona (4.1%).
Now this is a terrific beer to start an evening with.
It’s light and golden and easy to drink. Delicious apple fruitiness and the most intensely lingering dryness to the finish.
It certainly whetted my appetite for the evening ahead.
I was just finishing it when my dear chum and former band-mate Darren turned up.
We had another Arizona.

We talked of family life and work and nonsense and drifted into a pint each of 6 Bells Noggin (4.1%).
Another light and easy to drink beer, this one had a fruitier malt than the first and an almost overwhelming background flavour of cloves.
Not quite off-putting but close.
CAMRGB #2 Paolo turned up, bought a pint and we caught up on holidays and music and beer and more nonsense. 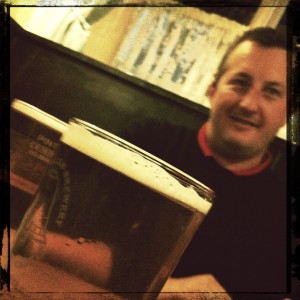 Then it was time to go to the bar.
I opted for a Shire’s Dabley Gold (5%) which at five percent was the strongest beer of the evening.
It was good and tasty but lacking in something.
A little too thin perhaps.
Decent floral hops but none of the malty body I was hoping for.
We talked a little of The Campaign For Really Good Beer and both chaps said they were surprised at how quickly the thing has grown.
Both had been on holiday (though not together) and had come back to find this here website, a bunch of followers and a twitter feed full of beery talk.
I admitted how overwhelmed I’ve been over the last couple of weeks and then went to the bar.
To close I had another Hobson’s Dark Mild.
It had been so very good at lunchtime I just had to have another.
It didn’t disappoint, and we said our goodbyes full of warm, dark, beery goodness.

On Sunday I popped down to Ironbridge to visit the Ironbridge Brewery.
Unfortunately I’d not called ahead, and arrived to find them closed for some refurbishment.
I dropped some CAMRGB flyers through the door and wandered around the gorge for an hour or so. 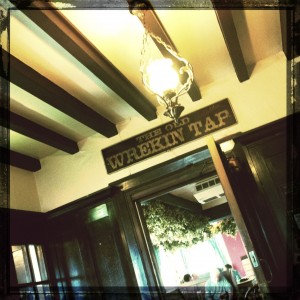 Arriving home at lunchtime I decided it would only be right to pay one last visit to The Wrekin Tap.
The landlord was still not there (perhaps he was hiding from me) so I bought myself a Hobson’s Town Crier (4.5%) and found a quiet corner.
Town Crier is such a lovely beer.
Pouring like liquid straw, all warm and golden, you get deeply satisfying malts with hints of Weetabix grain and an almost crunchy, leafy, dry hop ending.
This was the best way to end the weekend.
Now it’s Monday and I’ve just arrived home having dropped in to a couple of brilliant breweries to say hello and talk about beer, but that’s for another post.