As I mentioned in an earlier post, my local vintner has a good selection of bottled beer.
What I didn’t mention was that a week or two ago I popped in and was enormously flattered to be asked to give advice on and help choose part of their new range of stock.
I greedily grabbed the catalogues and began drooling over the beers on offer: Nøgne Ø, Odell, Victory, and more.
Then I turned the page once more and in front of me was a list in Flemish.
A list of beer from a certain Dutch brewer.
My heart raced.
You see, some months ago I interviewed Brouwerij De Molen as their beer had just come into my life and had blown me away.
That love affair has continued to grow and flourish and with every brew of theirs that I try they re-establish themselves as my favourite brewery.
We ordered three of their beers for the shop.
One of which, Rasputin, I have reviewed previously, and these two: 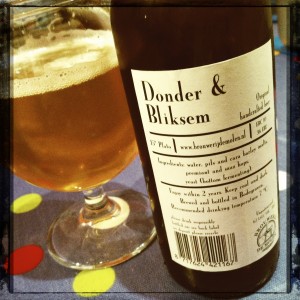 Donder & Bliksem (6.2%)
This is interesting.
Made with Pils & Cara barley malts, there’s a definite lager caramel, but the hopping with Premiant & Saaz make this something different.
Sharp and tangy, crisp and dry.
An apple and honey aroma to boot.
There’s a fresh green woodiness to the beer that leaves such a clean finish that it demands you have another one. 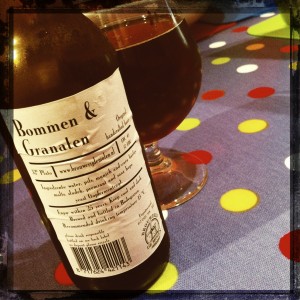 Bommen & Granaten (15.2%)
Oh my word.
This is something special.
Pouring thick as treacle, this is an intensely appley experience.
Deep and rich and wonderful. The flavours are enormous and voluptuous and overpowering.
Red fruits, orchard leaves, pine nuts.
Then a hop to die for.
Long and dry and cleansing.
All this over a chest warming, rum tinged alcohol kick.

Don’t tell my wife, but De Molen is my girlfriend.