Posted on November 6, 2011 by Simon Williams

Following on from my piece on Sierra Nevada Torpedo, the other new bottles to catch my eye in Waitrose this week were three well-dressed 330ml beers called Curious.
There’s a Porter, an IPA and what’s called a Brew (which, it turns out is a re-fermented lager).
From the labels on the front one could easily be forgiven in thinking that Curious is the name of the brewery, but look a little closer and, in the small print on the back you find that this beer has been produced by English Wines Group PLC.
So, this is beer brewed by a wine producer.
Um….?

Each of the bottles currently sells for £1.20 making them cheaper than anything similar in the shop.
So, if these beers are any good then we’re getting a brilliant bargain, right?
Let’s see what they’re all about then. 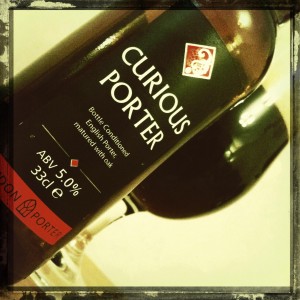 Curious Porter (5%)
Soft dark chocolate malts, decent plum tones, light grassy dryness to the finish.
A pretty decent porter though I’m not convinced it’s bottle conditioned as the label says – I poured it without any sediment, and found none even when I swigged the last drop directly from the bottle. 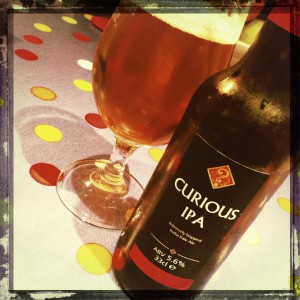 Curious IPA (5.6%)
The little 330ml. bottle promises so much but it’s all a bit thin and watery.
There’s just nowhere near enough body to carry this off.
It’s not undrinkable but it is unremarkable.
There’s a suggestion of burned sugar and a pleasing, if slight, nettle tartness, but it just feels so lacking.
For the price you could probably do a lot worse, but regular IPA lovers will be left disappointed. 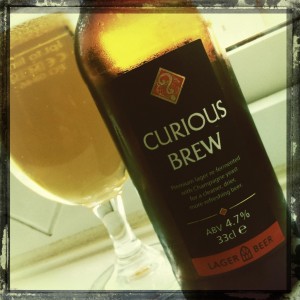 Curious Brew (4.7%)
Lager re-fermented with champagne yeast.
It doesn’t say whether they’ve brewed the lager themselves or bought it in and played with it.
Some nice toffee apple flavours and a flourish of bitter green grape at the end.
OK, but nothing special.

To sum up then, you can buy three bottles of beer – An IPA, a Lager and a Porter – in Waitrose for less than a fiver.
That’s a pretty good deal and the beer is drinkable, just very unexciting.
Or perhaps I’m expecting too much all the time.