Posted on November 4, 2011 by Simon Williams

Yesterday was Stout Day.
It just so happened that I had a day out of the office doing some work from home and spending time with the children.
This meant I spent much of the day in a state of agitation and excitement.
When I’m in the office and know I’m nowhere near the fridge I can put a lovely glass of beer to the back of my mind for large chunks of the day (until about 4pm when ‘the need’ kicks in), but when I’m at home and I can see the fridge whenever I go into the kitchen the hours and minutes drag by.

Beer o’clock  finally arrived, and with the youngest in bed and the eldest safely bathed and watching a last bit of telly, I was able to open my first stout of the day. 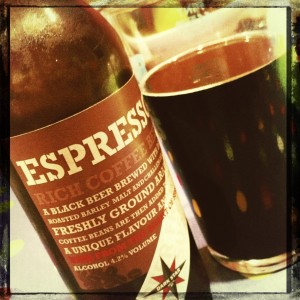 Dark Star Espresso (4.2%)
The beer pours very dark but doesn’t look as thick and viscous as I would generally want a stout to be and there was next to no head.
It wasn’t the start I was hoping for and on tasting it I couldn’t decide if I liked it.
The first mouthful is a cup of chilled black coffee, rich and crisp and clean.
But then the lovely, and very clever, subtle blend of dark malts and spikey, peppery hops pop out.
By the end I realised I liked it a lot!

I put the eldest to bed and we read a book together and then I had brief chat with my wife.
She’d been out.
She’s not a beer drinker.
She doesn’t see what all the fuss is about.
Then it was time for stout number two. 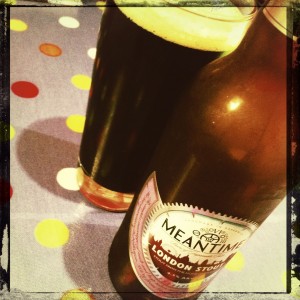 Meantime London Stout (4.5%)
This one is an old favourite and is always reliable, full of the classic stout flavours.
Pouring a thick, chocolatey brown and smelling by turns sweet and peppery, London Stout is a winner.
A very seductive smokiness provides a terrific backbone for the dark chocolate and fireside wood of this beer.
Then there’s a snatch of ripe plums and damsons before the snap of the hedgerow hops.
Ace.

By this time we’d moved through dinner and were in front of the TV while I talked with other stout drinking friends on Twitter.
Some of the people out there had some very interesting beers to drink and I was a little jealous.
That is until I moved on to my final stout of the evening. 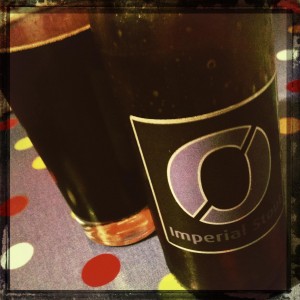 Nøgne Ø Imperial Stout (9%)
Now this is the daddy.
For me it gives Brew Dog’s Paradox (one of my favourite beers – The original one, not the Smokehead) a real run for its money.
Deep and dark and rich, it pours slowly and seductively into your glass.
Luscious thick black treacle, christmas pudding fruits, a strong whiff of whisky and a satisfying smokey nose.
There’s vanilla pod sweetness and black peppercorn spice before the extraordinary hopping sweeps everything away ready for the next mouthful.
An astonishing bottle of beer.

By the end of my three stout run I have to say I was ready to stop.
I love the flavours and textures of stout, but by the end of the evening I was gasping for something crisp and light and refreshing.
I needed something highly hopped and full of citrus.
Sorry but it’s true.
Stout is brilliant, but it’s best drunk amongst other beers.
I usually have it as a final beer after an IPA or a golden ale.
And from now on that’s what I’ll be doing.
Cheers!