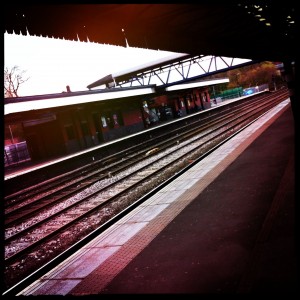 This weekend saw the 21st Shrewsbury Real Ale Festival and as I’d got to be over that way to watch my eldest daughter’s end of year concert thing I had the perfect excuse to be there.

I left work on Friday evening and drove over via Wolverhampton where I picked up the splendid CAMRGB T-Shirts (see the Stuff To Buy page) that had been printed by an old friend of mine.
We spent an hour catching up before I sprinted the last few miles down the M54. After all, it was now getting on for eight o’clock and I could hear the beer calling me. 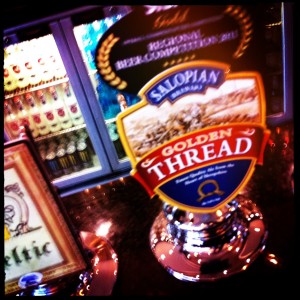 Saturday morning I dropped my daughter off at her dance class and headed over to Shrewsbury on the train, my rucksack crammed with beery delights for Paolo who was joining me that day.
We met up with Darren (who by the end of the day had been given the title of Head of the CAMRGB Paramilitary Wing) for some lunch and the first pint of the day in a pub around the corner from the Festival Venue and I went for a pint of Salopian Brewery’s Golden Thread (5%) which was all lively malts and a nice crisp hop. AT 5% it was quite a start to the day.

After finishing our meal we made our way to The Morris Hall, a beautiful old meeting hall in the old quarter of Shrewsbury. All high vaulted exposed beam ceilings and stained glass windows. 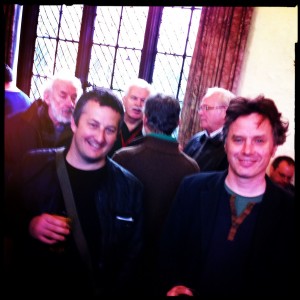 We were met by the ever warm Jake from Salopian Brewery, had a quick catch up and drank a beer.
I tried a Blackwater Brewery Expressionist (5%), light and summery but with enough backbone to make it a really good session beer.
We talked of CAMRA and CAMRGB, brewing in Shropshire and what the pubs were like.
A couple of CAMRA members noticed our T-Shirts and had heard of the organisation. One of them even following on Twitter.

Next up for me was Off Beat Brewery’s Odd Ball (4.2%). A red ale, the flavours were autumnal and crisp but the beer was a little thin for me and didn’t leave that “must have more” feeling. 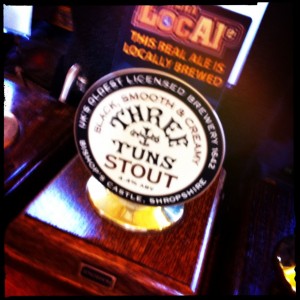 Before leaving the festival I tried a glass of Three Tuns Stout (4.4%) which was very good indeed. Rich and dark and velvety with a good hop punch in the finish.

We only stayed in the Festival for an hour or so because, as Darren pointed out, “there’s a lot of testosterone in the room.”
Instead we moved on to some of the local pubs.
First up was The Salopian which is situated on the riverside at Frankwell and has a small bar crammed with good beers from all over the place.

I bought a pint of Thornbridge’s Browne (4.3%) which I found wholly uninteresting. To me it tasted just like its name. A bit malty, a bit hoppy, very brown. 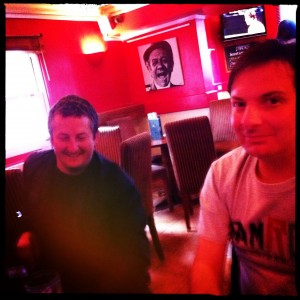 We had a good laugh at each other’s expense as the alcohol started to kick in and, as we left for the next pub Jake said his goodbyes and headed home to see his wife while he could, “still focus.”

We were joined by Fig.
Now, I have known Fig since 1989 but until only a handful of years ago I had no idea wat his real name is.
I was even in a band with him for three years.
His name’s Jason (I think).
We’d not seen each other in a long time and he very much enjoyed ordering as much bad lager in our company as he could.
It’s part of his charm. 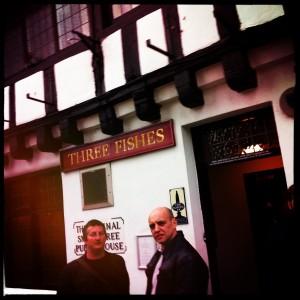 The next pub was The Three Fishes which is right in the heart of Shrewsbury and is a beautiful old building with low ceilings and lots of nooks an crannies.
As with the previous place, the Fishes boasted a great selection including Fyne Ale’s Jarl which I was delighted to see.
But my eye was taken by Stone House’s Bitter (4.5% ish) which I liked a lot. Creamy and biscuity and just dry enough to satisfy.

Next up was the Admiral Benbow which was the opposite side of town and almost back where we’d begun, the pub crawl being organised by four drunk men in a Beer Festival that was hardly surprising.
I wasn’t keen on the pub but I did enjoy the pint of Otley’s Oxymoron (5.5%), a black IPA that made a terrific change to the flavours I’d been drinking all day. Cuttingly bitter hopping and deep, thick malts. It was really good. 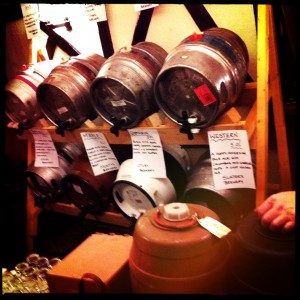 We ended the afternoon (yes, you read that right. By this point it was only about five o’clock) in The Loggerheads. A very old pub made up of lots of tiny little rooms connected by a central bar.
I had a Titanic Brewery White Star (%?) which had been kept badly and was sorely disappointing.

So, that was that.
We said our goodbyes and I stumbled for the train.
On getting back to my mum’s place I ate a pizza, poured a Punk IPA and stuck a bottle Of Salopian Oracle in the freezer to cool.
About three hours later I woke up on the floor, poured the un-drunk Punk down the sink and collapsed in bed.
I woke this morning vaguely remembering having bought a bottle of beer and found the Oracle had exploded in the freezer compartment that I’d left it in.
A lovely treat for a hangover. 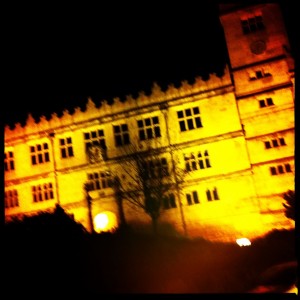 So, now it’s Sunday.
I was supposed to see my daughter dance this afternoon but unfortunately family illnesses meant I made a dash back across the midlands to be here at home in case anything went terribly wrong.
Fortunately it hasn’t so far.

If you’re ever in the area, visit Shrewsbury.
The pubs are marvellous and the people are excellent.

I’d like to thank Paolo, Darren, Fig and Jake for a marvellous day, and all the CAMRGB folks who sent my family good wishes.