Posted on November 5, 2011 by Simon Williams 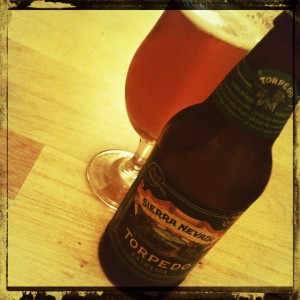 Well, well, well.
Whoever does the buying for Waitrose at the moment is doing a good job.
I get the distinct feeling that whoever they are, they are definitely a bit of a beer geek.
It appears that after having added new ranges that included Thornbridge last year, this year’s update includes some really good bottled beer.
Having been a big fan of their Pale Ale, I’ve been wanting to try Sierra Nevada’s Torpedo for quite some time.
And now I can just pop into my local supermarket and pick it up.

To put it simply this is a sensational American beer to have on a supermarket shelf.
The beer is a beautiful deep honey colour with a light fizz that tingles your tongue.
The flavour is very deep and very rich.
Scorching pine resin and warm digestive biscuit malts provide the background over which the hops give lemon zest, hints of sweet corn, crisp spice notes and a soft herb aroma.
Then after all that the finish is long and dry and wonderful.

I noticed some other new beers on the shelves too, including beer called “Curious” which is what I am, so I’ll drink them and let you all know what they’re like.
For now though, Waitrose are doing a splendid job in the beer department and Sierra Nevada Torpedo is a fantastic beer.