Skinner’s Cornish Knocker (4.5%) And Why People Should Move On

Posted on November 8, 2011 by Simon Williams

Last night I opened a bottle of beer that’s been sitting in my collection for some time.
I bought it as part of a multi-buy deal and kept looking at it and then putting it back.
Around the top of the label it proclaims, “Twice Supreme Champion Of The South West”, which I’m guessing would make many people think it was worth a go.
The thing is, in an age where we can get hold of amazing drinks full of flavour and life, isn’t it time to let go of the attitude that old and traditional is best regardless of its true worth? 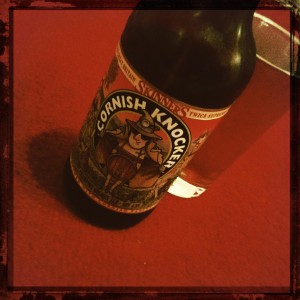 Skinner’s Cornish Knocker (4.5%) is an amalgam of all the things wrong about CAMRA and “real” ale in 2011.
It pours as flat as dishwater, there’s the barest hint of malt (“Cornish Barley!” says the label) and the merest flick of hops.
It’s not undrinkable, it’s not even terrible, it’s just…well…unimaginative and uninteresting.
And to make matters worse it comes wrapped in a ridiculous 70’s “comedy” innuendo label.
England is no longer the land of Carry On Confessions Of A Beer Drinking Window Cleaner.
It hasn’t been for some time, though there are many who appear to wish it still was.
Tired and old and unnecessary, I find it hard to believe that people can still hold this kind of beer up as an example of what’s good about English brewing when there are so many breweries making bottle conditioned and/or cask beers with so much more life and vigour and excitement and FLAVOUR.

19 Responses to Skinner’s Cornish Knocker (4.5%) And Why People Should Move On