I live in a small and rather attractive village in south Leicestershire.
Being a middle aged man with a young family, and having only lived here a few years, I don’t go out very much. 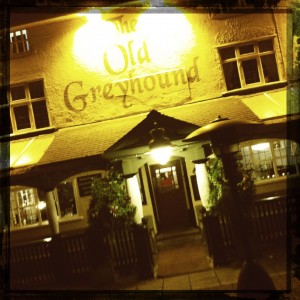 But I have a friend in the village and we meet up about once every six months for a drink and a catch-up.
We actually met when our sons were sharing the climbing frame in the local park and very quickly realised our musical tastes were similar.
Anyhow, last night we decided to get together for a drink.
There are three pubs in our village.
One is a beautiful little old pub with a lovely semi-circular bar that’s been ruined by its owner’s insistance on installing the biggest TV you’ve ever seen and making sure it stays on at all times.
The second is an enormous building on the edge of the village which was once an old folks home and  now serves buy-one-get-one-free bad steak and chips for a fiver.
The third, and the one we chose last night, could be a fantastic pub if it was allowed to be.
When we first came over to look at the house we subsequently bought we had lunch in this pub.
I had locally caught pheasent.
It was brilliant.
In the few years that we’ve lived here it has changed management several times, and each time has lost something. 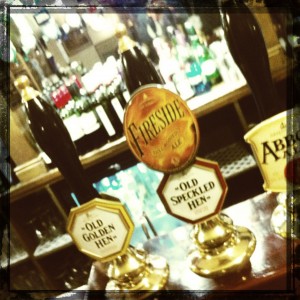 It’s now a Greene King pub and so it was with a sigh that I approached the bar.
They had what at first glance appeared to be a guest ale on.
Fireside Full Bodied Ale (4.5%) had a nasty alcohol burn on the first mouthful and left a nasty mix of sugar syrup and old biscuits on my tongue.
It turned out on closer inspection that it is indeed a Greene King beer labelled to look like a guest.
We took a seat and caught up on work and family news, and then I went to the bar.
The choice was really none existent.
You could have IPA, Old Golden Hen, Speckled Hen, Abbot’s Ale, or the aforementioned Fireside.
Each and every one a Greene King beer if you scratch the surface a little (Morland, brewers of the Speckled Hen range were bought by Greene King in 2000 or so).

It was with a heavy heart that I ordered a pint of Old Golden Hen (4.1%).
Almost flavourless, there was that hint of green grass that all GK beers possess, but it lacked any body or depth of flavour.
We laughed a little at the family across the bar who, while drinking identical pints, were wearing the primary colours of the CAMRGB, Red for dad, Green for daughter and Blue for mum.
Our final beer of the evening came around, we couldn’t stay out late as both our sons were marching with the Cubs in the Remembrance Sunday Parade the following morning.

I looked across the bar again.
Even the Guinness was beginning to look appealing but in the end I went for a Greene King IPA (3.8%).
Now, when it comes to GK beers in bottles, if I had to drink one it would be the IPA.
At least it’s been shown what hops look like.
Not out of cask though.
Yet again I was reminded why CAMRGB came into being.
What’s the point of championing something that quite often, if not kept exactly right, can be so terrible. 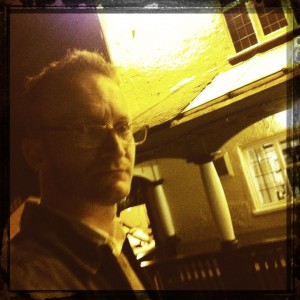 This wasn’t an IPA.
It was barely a beer at all.
You could actually taste the water in it.
The first mouthful, like the last, had the barest traces of malt and hops, but they were so very tiny that they may as well have not been there at all.
It was a terrible pint of beer.
It makes me wonder this – Why fight to get watery lagers out of pubs if they simply get replaced with watery ales?
Ah yes, that’s why – The campaigners own both the breweries and as a result the pubs serving the breweries’ beers.
Certainly that’s how it has begun to appear.
We left the pub having had a good evening surrounded by bad beer and walked home through the village.
I should have gone to bed but I needed sustenance.
I needed something with a flavour.
Something that would give me a zingy palate,  a warm belly and a sense of satisfaction.
I poured myself a Hardcore (9.2%) by Brew Dog, took a gulp and breathed a sigh of relief.

22 Responses to The Greyhound & Greene King, Slayer of Beer