Waitrose currently have a special three for two offer on with Bath Ales.
I’d not had any of their beers in ages so I bought some.
Last time I had them was well before CAMRGB so I guess I should do a quick write up. 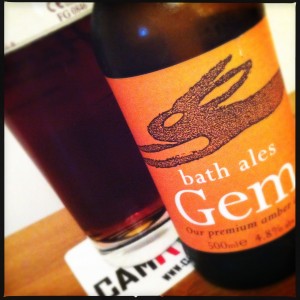 Gem (4.8%)
This beer is so easy drinking it’s almost funny.
Soft round toffee sweets and a touch of spiced apple mixes with the fresh, dry green leaf flavours of the Goldings.
There’s nothing difficult or “clever” about Gem, it’s just a really well crafted pint, and a great beer to use if you’re going to be introducing any of your friends to the world of beer geekdom over the festive season.
Put simply, this is a quite brilliant session beer. 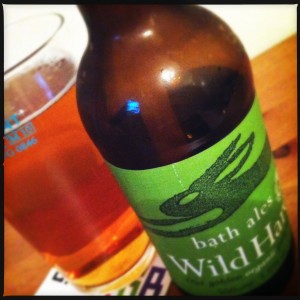 Wild Hare (5%)
This brewer has a definite signature flavour.
It’s to do with the malts.
The caramel is intense and full of sweet shop stickiness, but it’s tempered with a big hit of spicy black peppercorns.
Over this the hops are full of lime juice and the leafy green flavours that remind me of a hedgerow after the rain.
Wild Hare is a really good, dry pale ale. 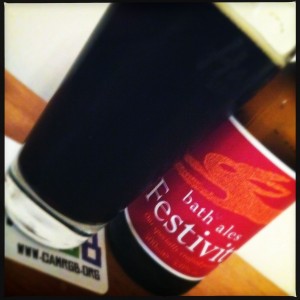 Festivity (5%)
A seasonal porter full of raisins and plum pudding, deep and rich with port, there’s also a pleasingly crisp hop finish.
As with the Gem there’s nothing dangerous or difficult about this beer, but it’s a beautiful piece of brewing.
It’s simple and flavoursome, more-ish and satisfying.
Very Bath and very good.

2 Responses to A Bath Ales Triple