And a pint in a pear tree! 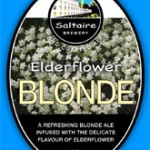 Blimey. Where has December gone? I had plenty lined up to write about from discovering brews from the numerous micros from East and North London at the 28th Pigs Ear Beer Festival to the campaign to save the multi award winning Wenlock Arms* from closure and demolition, not to mention a piece on a pub crawl undertaken in Peterborough. And I will not mention paying £3.95 for a pint of sub standard Timothy Taylor Landlord in a nice looking but ultimately disappointing back street boozer in Clerkenwell the other week!

Still it’s not all bad and I had to mention a few excellent brews I have had recently in the shape of  Cascade and Elderflower brews but lets start with Cambridge Moonshine Cherry Brown (4.6%). It  was one of the beers I tried at the Pigs Ear at the beginning of the month. The smell of sulphur was over powering and the taste was a nice sour one made from black cherries. It was not far from being a Lambic although more Geuze than a Kriek despite the name.

Another pint (yeah right!) I enjoyed immensely these past couple of weeks was Saltire’s Elderflower Blonde (4%). With a name like that do I really need to describe it in more detail suffice to say it was very refreshing drink shining high amongst the now frequently boring Christmas specials brewed for the festive seasons part time drinkers. I see they make a Cheeky Kriek and a Raspberry Blonde too so I will have to check those out at some point.

I have not heard of the London Brewing Company before and I supped a couple of their excellent Golden Mean Cascade Dry Hop beers (3.7%) recently. It had lovely grapefuit overtones coupled with a refreshing citrus and floral taste which means a big thumbs up from me. As for the brewery it seems they brew out a Highgate pub called The Bull which means another addition to my must visit list! Sadly those beers were tried too late for inclusion in this years CAMRGB Beer of the Year award. My votes were for Langham Hip Hop, Ilkley Gold and Buntingford Citra for anyone still awake!

Talking about Buntingford and for those who have been following my scribbles about the Buntingford Brewery Single Hop series I finally got around to trying the latest one this past weekend which used the Australian hop “Summer”. It was a bit of a let down to be honest being far to malty for me. Still the Citra is due back on soon so I can wash that Horlicks taste out of my mouth!

Thanks to Simon for starting this campaign and allowing me to witter on at will. Have a great festive season and if I find a beer worth shouting about whilst I am away in Mighty Oak Country I will sure to let you know.

*You can read about/join the campaign to save The Wenlock on Facebook.  At the time of writing Hackney Council has covered the the Regent’s Canal Conservation Area to include the pub meaning it should be now safe from the threat of demolition.

This entry was posted in Beer Review, Beer Travels and tagged Drinking. Bookmark the permalink.