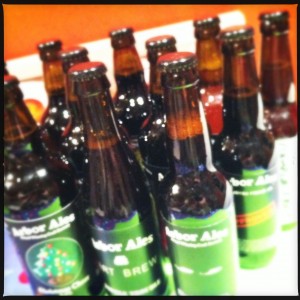 Don’t you just love finding a new brewery to fall for?
They keep popping up and I keep falling.
It helps that I’ve yet to meet a brewer who isn’t a nice guy to talk to.
Arbor Ales are based in Bristol and have been making beer since early 2007.
They make a wide range of beers, including a whole host of stouts and porters, some single hop ales and an enormous double IPA, most of which is sold locally.
They’ve started bottling and so I got hold of a whole bunch to try.

But before we get onto the beers, let’s have a chat with the brewer.

Hello, please introduce yourselves:
I’m Jon and I make the beer. So does Paul, he’s my right hand man / delivery driver / temporary salesman. My partner Megan usually does the sales (and runs the whole show to be honest) but she’s currently on maternity leave. Lastly, Megan’s brother Namaya runs the pub side of the business. That’s it. Actually, I think we probably have some more staff in the pubs. Or maybe Namaya really does do it all…..

When did you begin brewering? Was it a hobby that grew or a business idea form the start?
Our first commercial brew, “Old Knobbley” was in March 2007 in what would best be described as a shed at the back of my brother’s pub. I was still employed as a network consultant at the time so was “working at home” that day! I went full time a few months later and brewed at the pub for a year before it unfortunately closed. In June 2008 Namaya came on board, we bought a bigger plant and looked for a new site.

So where do you brew now and what capacity do you have?
We’re currently in a unit that used be a big walk-in fridge at a former Brains faggots factory in Kingswood, Bristol. We have a 5.5 BBL David Porter brewery with four fermentors, giving us a weekly capacity of 22BBLs. Typically, we produce around 300 firkins a month. We’re moving soon.

Are you filtering your bottled beers or are they bottle conditioned and why.
Well, what happened was…I’ve no problem whatsoever with filtered beers as long as they taste good. We don’t filter ours though as our filter housing somehow found itself being modified for use as a Randall. We’re planning a big investment in bottling equipment in 2012 and may well end up lightly filtering some of the beers.

You’ve recently taken on a pub or two. How’s that side of the business developing and what do you see for the future of both pub and brewery?
The two pubs are very different, but both thriving in difficult times. We run the pubs the same way we run the brewery, which simply means creating an environment that we want to drink in ourselves. Seems to be working so far. As for future plans…well, we’re just about to relocate the brewery to a site not far from the two pubs. At some point, we’ll be putting in a bigger plant but for now the focus is on bottling. Hopefully, Megan will be back to work soon too, so we’ll have some idea of what we’re all supposed to be doing! 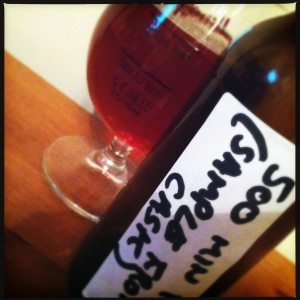 500 Minute IPA (10.7%)
This is an extravagant beer.
There’s a massive hit of blue cheese rind and cut fields.
Red currants and blackberries fight for attention while drinking white rum and throwing hops at each other.
And boy, the hops are enormous.
Oily, sinewy, dry as hell, full of spices and vinegar, they peeled the skin from my lips.
This is one hell of a good beer. 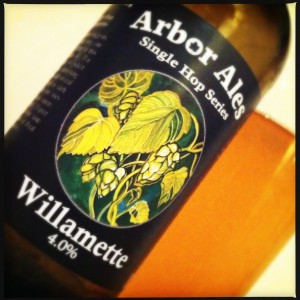 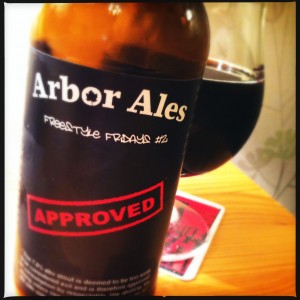 Approved Stout(7%)
A string hoppy stout brewed the weekend that the 7.5% Tax kicked in, hence the name.
Pouring quite flat with no head, I must admit looking at it in the glass I was worried, but the flavours won me over.
Loganberries and blackcurrants, chocolate with a dash of chilli, thyme and a hint of rosemary.
Then there’s hops.
Yes, on top of it all there’s hops.
Flowery garden scents and lemon pith. Not zest, just pith.
Brilliant flavours.

Rainbow In The Dark (6.66%)
Arbor make a lot of stouts!
Here’s another.
Brewed in tribute to Ronnie James Dio, this beer is deep and dark and delicious.
Spicy and floral to begin with, the black IPA style flavours give way to a lovely liquorice ringed chocolate but still maintain a satisfyingly dry finish. 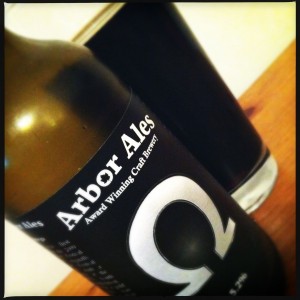 Omega (5.2%)
Soft creamy mild that ain’t so mild.
This is a dangerously easy drinking beer.
Soft fruity caramelised sugars, plums and damsons, just a touch of coffee.
Very light on the hops as you’d expect, this is very more-ish indeed. 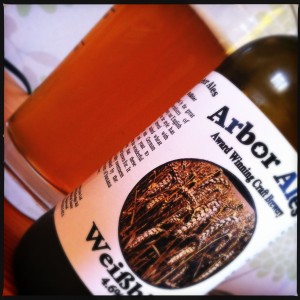 Weissbier (4.6%)
I still can’t get the taste for this kind of beer.
Bananas, spices are all nice but it’s the metallic aftertaste I don’t enjoy.
But that said, this is a well made and well rounded glass of beer. 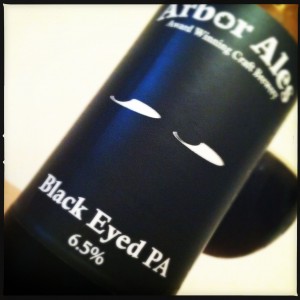 Black Eyed PA (6.5%)
Recently I said I was getting bored of black IPAs.
This is good enough to change my mind.
Pouring as black as tar with an espresso head, this is 330ml of Really Good Beer.
Hazelnut infused coffee, bitter dark chocolate and a good smack of damsons.
This is a thick and rich beer at the beginning, warming enough to make you want to sit back and relax with it.
But just as you get comfy a great big fist of hops hits you square in the mush.
Long and dry and crisp and sexy.
This is a fantastic little beer. 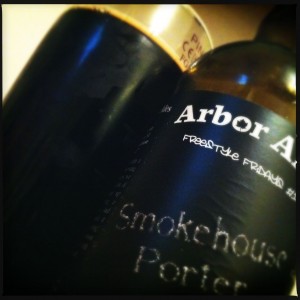 Smokehouse Porter (4%)
Really good bitter chocolate, smokey wood fire notes, and some forest fruits.
There’s black coffee and shortcake.
What spoils this is that I happened to get a bad bottle (it happens).
This one was flat.
A big shame. 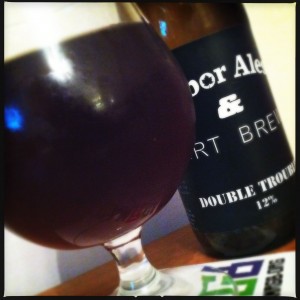 Double Trouble (12%)
Really decent barley wine brewed in partnership with Art Brew.
Dry sherry fragrances, deep fruity barley malt.
Thick and sticky and gorgeous.
Prunes and plums and damsons and black cherries.
Fiery peppercorns, liquorice and a little hit of espresso.
The alcohol is hot and catches your throat like a good single malt right before the hops dry you out ready for the next mouthful.
Wonderful. 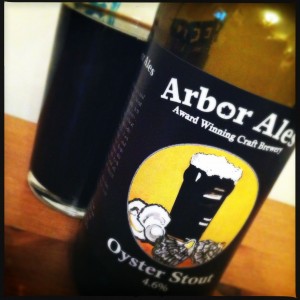 Oyster Stout (4.6%)
This beer poured very flat, though I may simply have poured it badly.
Fathoms deep, dark and dreamy in the glass, this is a drink for those who don’t mind a lack of fizziness.
The flavours are intense.
Really intense.
The malting is like being smacked with a chocolate coated lump of elm, densely woody and hefty with cocoa.
There’s a lovely smoothness which, I guess, is created by the addition of the oysters.
Finishing everything off there’s a tangy, tingly, pepper and spice in the hops that leaves you wanting another mouthful.
Hiding away at the back there’s a slight smell of salty shoreline.
It reminds me of living by the sea in Falmouth.

So there you have it.
You can find Arbor by going to our links page.
Well worth discovering for yourself, this is a brewery to keep an eye on.