Posted on December 2, 2011 by Simon Williams 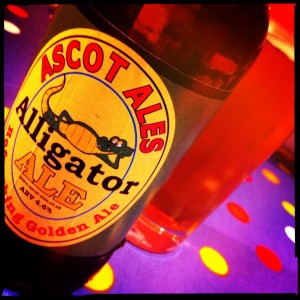 Last night I opened a bottle of Ascot Ales’ Alligator and it got me thinking something that’s been hanging around in the back of my head for some time now.

Alligator pours a light amber with a reasonable head for a bottle conditioned beer.
This is very light in everything including flavour.
There is a definite smack of floral hops and the beer is nice and dry.
It’s quite an odd beer in that I find it strangely more-ish even though there’s very little to it.

What I find most interesting – and before various people jump on me from a great height, this is NOT an anti CAMRA rant – is what I have started to notice (and I think this has been mentioned before by other beer writers) about bottled conditioned beers with the “CAMRA Says this is Real Ale” symbol.
That is that they all taste, by and large, the same.
It’s not a bad flavour in any way.
In fact, as noted above, it’s generally most enjoyable.
But it is pretty bland in comparison to those “un-real” ales that we know and love.
Everything is slightly subdued and safe.
The hopping is floral and light and crisp.
The malt is biscuity and light and mellow.

On the other hand there are bottle conditioned beers without the label (Hopshackle for example) that taste extraordinary.

6 Responses to Ascot Ales Alligator (4.6%) And A Certain Symbol