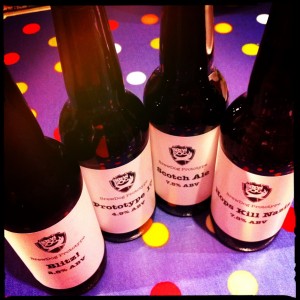 BrewDog have brewed four prototype beers.
BrewDog have sold them online and are asking punters to vote on which should become part of their core range for next year.
BrewDog are very good Marketeers.
I got hold of some and this is what I think. 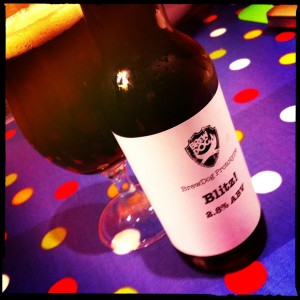 Blitz! (2.8%)
Well now.
BrewDog describe this as a, “caramalt only west coast hop bomb.”
This looks, smells and tastes like 5AM Saint with the alcohol removed.
It is in fact the GHOST of 5AM Saint.
It has the red look, the floral aroma and a decent finish.
But it has no body whatsoever.
There’s simply no depth of flavour.
I find a lot of BrewDog’s marketing boring these days, but I do find it amusing that they’ve gone the low alcohol route considering it was recently part of a CAMRA campaign that also inadvertently (perhaps) led to raising tax on high ABV beers.
Nice idea, insipid in reality. 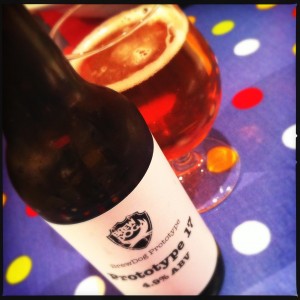 Prototype 17 (4.9%)
I wasn’t expecting much from this but it’s really good.
Pale ale with American hops, Belgian yeast and Scottish raspberries.
There’s a very metallic, but not unpleasant smell on opening the bottle, and this follows into the first taste.
Shiny and polished, there’s a lovely yeasty bite and only the merest whiff of fruit.
The malting is almost a chocolate digestive, followed by a huge, monster smack of hoppy goodness.
But it’s the use of the Belgian yeast that I love in this beer.
It’s sharp and intense and really lifts this away from the usual flavours associated with this brewer. 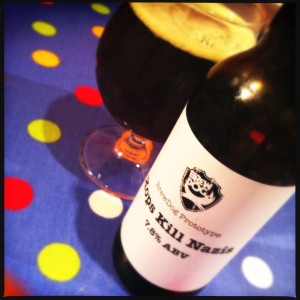 Hops Kill Nazis (7.8%)
This beer pours beautifully into the glass, all rich and deep and delicious.
The massive amount of Chinook hops give this red ale a real American craft feel.
There’s that leafy autumnal flavour you get from Odell beers et al, along with sticky maple syrup and chocolate caramel in the malting.
Hidden away is a definite hint of Dime bar and a touch of peanut butter.
This really is an ode to US craft beer, and all the better for it. 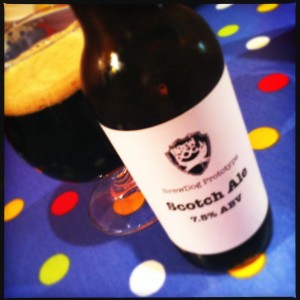 BrewDog Scotch Ale (7.5%)
The notes say that this is an, “indulgent, malty treat combining heather honey and 8 different malts.”
I was looking forward to this and expected a lot, which is why I kept it until last.
It’s hugely disappointing.
Cloying, unpleasant stickiness, this is malt heavy and really lacks any discernible flavours.
It’s a bit like tar actually.
Or the black gunk you get if you leave a cigarette butt in a glass of water.
Heavy and medicinal and, well, wrong.

So there we have it.
Four prototypes with a 50% hit rate for goodness.
At least from me anyway.
I’d be really interested in hearing what others thought of these.
As for which one I’d vote for?
It’s a very very close call, but I think the Prototype 17 just nicks it for having enough difference from the run of the mill BrewDog flavours.