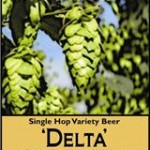 I say, I say, I say. What do you get when you cross fuggles Hops with Cascade ones?

Hmmmm. I think I had better give up writing crap jokes for Christmas crackers and concentrate on writing about brews instead. Anyway the answer is Delta, a new variety of hop, first created in the States in 2009.

It’s also the hop Buntingford are using in the latest of their single hop series – I must of blinked and missed the Summit which was the next one due!

So what do you get? On the first mouthful you get an initial sour taste that gives way to citrus flavours followed by a surprising grassy aftertaste which equals one very refreshing pint indeed. An excellent session beer and again, like all the others in the series, coming in at 4%.

The brewery also have a number of beers appearing this month including a Black IPA (Donner & Blitzen 4.4%), Silent Night 4.1% and the next in the single hop series which uses the Australian hop “Summer” – cads aren’t they!

One Response to Buntingford Delta (4%)