Right now, the best thing about CAMRGB is the people that I’m meeting.
And the beer that they’re making.
Whether it be professional breweries and brewers or, as with Calum at Gingerbeard Brewery, a home brewer who wants to share what he’s making.
I caught up with Calum and had a brief chat.

Hi Calum, how long have you been brewing and what made you start?
I have been brewing now for about two and half years. Homebrewing is something that I have been aware of since I was a child as my Dad used to brew his own beer. My enthusiasm for homebrewing has actually encouraged my Dad to start homebrewing again so I’m looking forward to trying his first batch after a lengthy break. Like I’m sure is the case with a lot of homebrewers I was struggling to find a beer that suited my taste so I started brewing my own. Once I started brewing I found that I really enjoy thinking about flavour combinations, techniques and experimenting with my own recipes.

What’s your set up?
My set up is relatively basic. I brew in my flat so don’t have much space and because of this I use the brew in a bag all grain method. I mash the grain in a big nylon mesh bag which is then removed from kettle before boiling the hot liquor. I have a 5 gallon thermostatically controlled mashing bin which I use for this process. I have a copper cooling coil which I use to get the wort to the pitching temperature as quickly as possible and the cold wort is transferred to my 5 gallon fermenting bin. Once the fermentation is complete I move the beer over to what I call the bottling barrel where I add more sugar, for conditioning, before bottling. That’s about it, there are some photos of the kit and my brewing process on gingerbeardbrew.com.

What’s the local area like for homebrewing? Is there a network or club you’re part of?
To be honest I’m not entirely sure, there is a CAMRA for the Aberdeen and Grampian region, but it’s not something I’m part of, but that’s as close as it comes to a homebrew group. When I started brewing in Aberdeen there was no Homebrew shop, which I believe is still the case. The beer scene in general wasn’t that great either with one or two pubs serving traditional ale and maybe one serving more exciting bottled beer but the rest was industrial lager. Since Brewdog opened the bar in Aberdeen I think there has been a lot more interest in beer and brewing. A few of my friends have become interested in the brewing process and some have even tried brewing their own beer. Even though there isn’t a local homebrew group or network I am member of a few homebrew forums and follow a lot of small breweries through twitter which provides a wealth of knowledge.

I was lucky enough to try three Gingerbeard beers, and here they are. 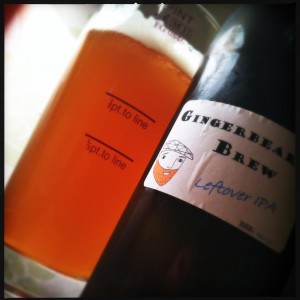 Leftover IPA (?%)
This beer pours a soft tangerine colour with a good head.
I’m really impressed with the fizz in this as it really tingles on your tongue.
Good nutty notes and a dash of malted milk biscuits, with a huge smack of hops.
You get a good sniff of the tropical fruit sweeties you loved as a child.
The finish is really very long indeed and full of hedgerow bitterness and floral notes.
If i was to be hyper-critical I would say that as a whole it could do with a little focus, but then this is a beer made from leftovers so it’s bound to be a little loose.
I like it a lot. 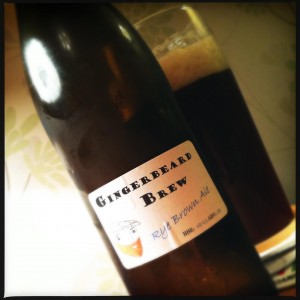 Rye Brown Ale (5%)
The pop of the cap on this was so loud I jumped.
This beer poured into the glass a gorgeous treacle brown with a terrific creamy head.
This beer is rich and warming.
There’s a whole grain flavour from the rye, all nutty and wholesome.
The alcohol heat is tempered by a good, if subtle, caramel sweetness.
Hiding away at the back of this beer, and appearing just before the lovely soft hopping, you find a really lovely old fashioned bitter beer flavour. It’s just a glance but it’s enough to really complete this brew.
Great stuff. 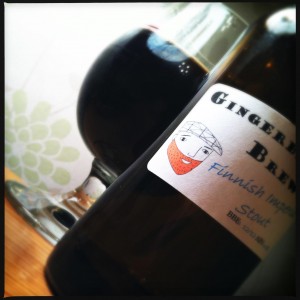 Finnish Imperial Stout (6.8%)
Bitter chocolate coated blackberries.
This is brilliant home brewing.
You can taste the time and effort and craft in this beer.
Rich chocolate malts, spiced wine from the berries and a full bodied blast of black pepper before the light leafiness of the hops kick in.
Who’d have thought that a fruit stout could work so well.

One Response to Gingerbeard Brewery