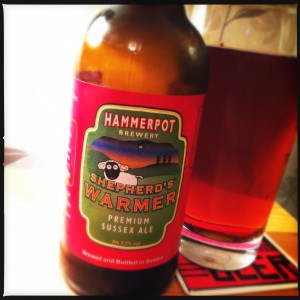 Well well.
A beer with that little sign that doesn’t taste like all the others.
There was bound to be one.
This golden ale pours with no fizz and no head.
A bad start in my book.
There’s an undeniably familiar (and weirdly pleasing aroma).
It smells just like coke, which brings back some fond memories.
In the late 90’s I took part in a week long Cultural Theory conference in Genk, Belgium.
I had a fantastic time, most of it spent in bars.
Lots of the kids over there were drinking their version of shandy which replaced lemonade with coke and it was strangely good.
This beer is what that mixture tasted like.
The flavours are Vimto fruits, a hit of mace and peppercorns and a touch of ginger heat.
This is a rather good winter beer.
It’s just a shame it’s flat.