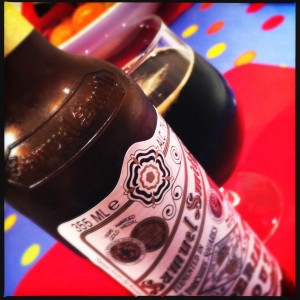 I have a definite soft spot for Samuel Smith.
It’s something to do with the way they package their products, the myths surrounding the brewery, and there are a lot of stories to do with Smith’s – Black unliveried delivery vans driven by faceless men, pubs that serve only the Smith’s beer, etc.
But mainly I love their beers and their production methods.
Traditionally brewed in the best sense of the term, Samuel Smith’s use a top fermenting stone squares and make exceptional beer.
This Imperial Stout is full of fruit.
Christmas pudding richness packed with candied peel, brandy warmth and a BIG barley maltiness gives way to a delicious bitter chocolate thickness laced with peppercorn heat.
This beer is big and full and comforting, almost made for late nights, it’s a big hug of a stout with a final nightcap of good, dry, leafy hops.
I’ve been drinking Samuel Smith’s beers for some time, and never really written about them.
That’s something that needs to change.
All that said, there’s a whole bunch of other things surrounding Samuel Smith’s that needs to be added to give some balance to this piece.
Yes, I love their packaging, their method of production and how people talk about their secretive black vans delivering beer, but there are some really important things that spoil all this for me like, as I was reminded last night, their staunch refusal to employ any women in any senior positions, not to mention the rod of iron used in dealing with their pub landlords and the rumours about how their business methods are harming the town of Tadcaster where they’re based.
All this is something that over the next few weeks I think I might take a closer at.