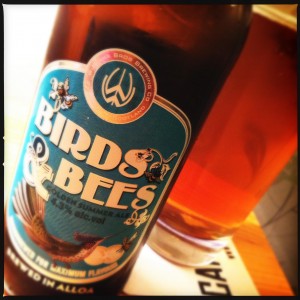 Perhaps it’s the wrong time of year for this, but this beer has been sitting around waiting to be tried for ages, so I thought I’d get done with it.
Birds & Bees is very light and crisp.
The Nelson’s Sauvin and Amarillo hops give a knife sharp edge and maintain a dry palate, there’s good caramel and molasses but the addition of elderflowers for me makes it too florally sweet. By halfway down I wanted it to be over, the elderflower had become so syrupy sweet that it was just too much.
Maybe it would be different on a sunny afternoon in June instead of a dark winter’s evening in December.