Posted on December 8, 2011 by Simon Williams 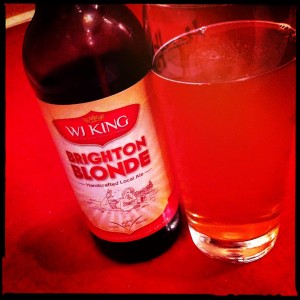 Another beer with with that certain little message on the back, “This Is Real Ale”.
Another beer that tastes much the same as all the others.

Brighton Blonde is not unpleasant, in  fact it’s not bad at all really.
But it’s so very uninteresting.
Light malts with hints of biscuit, light hops with hints of citrus.
Absolutely flat and almost lifeless in the glass.
There’s a slightly more sprightly floral hit than other beers I’ve had lately with that label on, but I’m talking in degrees of difference here.

It’s drinkable but forgettable.
As mentioned in a previous post, I’m becoming increasingly convinced that the label should read “CAMRA Say This Is Our Recipe.”