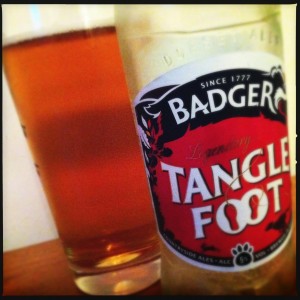 Three or four years ago, when I had first swapped red wine for beer I drank a lot of Badger Ales.
They’re a good way into beer appreciation.
But for me that’s where they end.
Many of their beers feel like novelties – flavoured with elderflower or fruit or liquorice extract.
I opened this Tanglefoot and immediately smelled something very familiar.
It took me a minute to work it out.
The flavours here are OK.
Malts that tempt you with hints if sweet caramel and a (very) slight hop bite.
But there’s a flavour, a thing, that has started me thinking.
Oh, and by the way, if you take a slug of this and then taste your exhaled breath there’s a distinct whiff of ashtrays (And I should know. Until two years ago I was a 40+ a day man) that’s really unpleasant.
But that’s not the thing.
The thing is that this beer shares a lot of key flavours with some of the Greene King beers that I don’t like.
Now, Greene King bottles are, on the whole, pasteurised, and I wouldn’t be surprised if Badger are too. Coincidence?
Maybe, but I’ll still be happy if I don’t drink this again.

NB: Since writing this article I have learned all sorts of things. But mainly I’ve learned that the similarity in background flavours in the beers I was discussing comes from the chemical reaction between the hops in the beer and sunlight which is exacerbated by the beer being put into clear glass bottles and not to do with the pasteurisation process – As I have noted before, I am still learning and will continue to do so (See comments to this review).