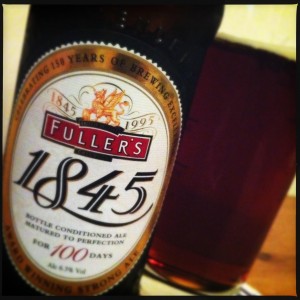 “Matured for 100 days.”
“Award winning strong ale.”
It’s pretty good, but would it win awards nowadays?
Not sure about that.
There’s an initial love it or hate it beefy blast of marmite in the first mouthful.
Really meaty and almost overwhelming.
But once it subsides there’s a thick hit of malt, almost cloying, coupled with a spiced hoppiness that’s quite pleasing.
I get none of the fruit cake noted on the bottle’s label though.
This is currently in Tesco’s four for a fiver deal.
I’ll buy it again as part of a deal but probably not otherwise.