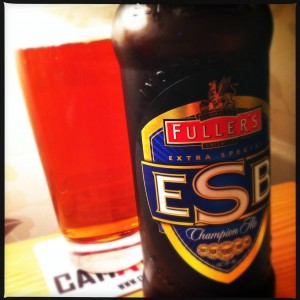 Put simply, this beer is proof that the larger breweries can make beers with character, beers that make the drinker take time to think about what they’re drinking.
It’s not all about tiny microbreweries making beer that only a few of us can get hold of and show off about having drunk.
From the first mouthful of this deep honey hued beer, the flavours are big and bold and interesting.
Basically, this is full of old fashioned bitter flavours, but they’ve got the volume turned up to eleven. The malt is thick and rich and full of sticky toffee and marmalade.
There’s a dose of peppery spices and then a big complex and long lasting blast of hops that clears the palate and makes this a very more-ish beer.
Some of the other ‘big’ breweries could learn from this.
That said, some of the smaller and cooler breweries could learn from it too.