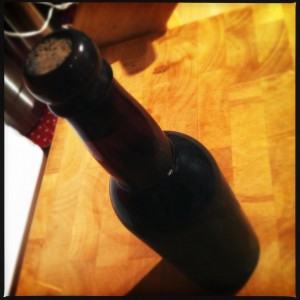 So this is the beer I was given at Greene King.
It was brewed in 1936 and was to be sold to celebrate the Coronation of Edward VIII.
And then Edward VIII went and fell in love with a commoner and abdicated.
As a result the beer never went on sale.
Instead it was hidden away in a dark, dank, dingy cellar.
Seventy six years later I’m sitting in my front room in deepest South Leicestershire with an open bottle in front of me and a smile on my face that you couldn’t budge even if you used a crowbar.
I think I was a bit luckier than Zak with the bottle I was given.
The cork came out in one go and brought with it a really intense blue cheese and sherry odour.
Pouring absolutely flat didn’t surprise me after all this time, but the colour did, being a deliciously deep red that glinted in the light.
The smell from the glass is very deep and very rich indeed.
A little like the richest trifle your Grandmother ever made you for Sunday tea – Big, hot sherry doused fruits, shortcake biscuit, silky custard, and a big punch of the blue veined cheese that your folks, sitting next to you, had moved on to while you had a second helping of pudding. 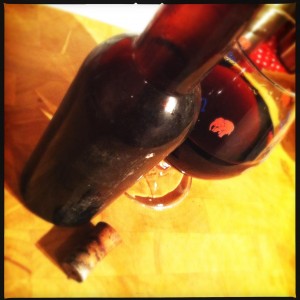 There’s an obvious sourness, but it’s in no way unpleasant.
Instead the sourness lends a balance to the intensity of the spirit soaked fruits.
Way back in the distance there’s a malty biscuit, like a heavy digestive, really satisfying and filling.
It’s a fleeting glimpse into what this beer may have been all those years ago when it was first brewed.
A rounded biscuit malt that poured a decent chestnut, we’ll never know just what this beer was meant to be.
What it is now is nothing short of drinking a glass of history.
And this slice of history has aged and developed into a really rather astonishing thing.
A Lambic-like sour beer full of rum and raisins and sherry trifle, the more I drink the more the blue cheese tang cuts across everything else and replaces the now forgotten hops and provides the dryness that leaves you wanting to take another mouthful.
I feel immensely privileged.