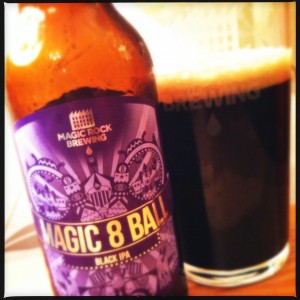 Another beer I got to sample during my visit to the brewery back in December.
At that point it was a work in progress.
Now it’s the finished article.
And what an article.
I still can’t fathom just how Magic Rock manage it time after time.
Magic 8 Ball is like pouring tar into your glass, it’s so thick looking and the hop aroma is really heady. My eyes lit up with the first mouthful.
And then they boinged out on springs.
There’s something about this beer that makes me think of Ren & Stimpy.
The flavours are so big and so bold they’re almost ridiculous.
Overwhelmingly fun to drink, you get a super sexy chocolate malt richness and a sweet fiery smoked flavour which really reminds me of Frazzles.
And there’s nothing wrong with that!
There’s also a fistful of squished berries, a twist of lime juice, and then one hell of a long dry finish.
A finish that grabs your tongue and runs off into the distance with it before letting go and allowing it to twang back into your face.
So, a bacon crisp laced beer bomb drawn by a cartoonist.
Fabulous.