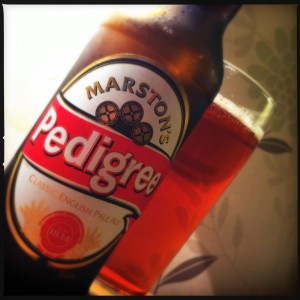 There’s really very little one can say about this beer.
I picked it up because having tried the Sainsbury’s IPA (brewed by Marston’s) the other day, I thought I’d remind myself of what Pedigree is like, and it’s a simple, old fashioned pale ale.
The beer pours a dark amber with barely a whiff of a head.
There’s a nice rounded malt that’s full of caramel topped digestive biscuits.
The Fuggles and Goldings give a decent spicy black pepper spike to the finish.
It’s not a mind blowing taste sensation but it’s a very drinkable and rather more-ish standard.
All in all a decent pint of beer.