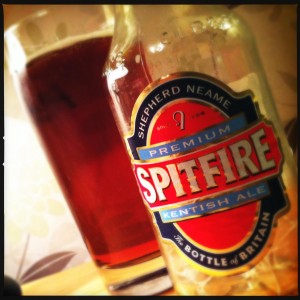 I’ve not had anything from this brewery for some months but after my travels over the last few weeks I’ve decided I need to return to trying some of the more readily available (or Supermarket) beers.
After all there are some beauties to be found (Fuller’s ESB and Bengal Lancer spring immediately to mind).
So I find myself staring down the bottle of a Shepherd Neame.
This brewery sell themselves as Britain’s oldest, but surely if they’ve been trying so long they should make better beer than this.
The malting is incidental, the hops are raw and sharp with a blast of spice but an after taste that is nasty.
Grassy and unpleasant and dry in a morning after way rather than a must have another mouthful way.
And what’s more, it’s put in a clear bottle in order to help make it worse.
If this is the (albeit self-titled) “Bottle Of Britain” then both CAMRGB and CAMRA have still got a long way to go.
Really bad.