Posted on February 4, 2012 by Simon Williams 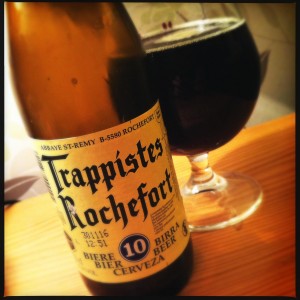 Yes this is a classic and yes everyone who takes beer seriously should have at least tried this already as have I, but it doesn’t hurt to remind everyone about just how special this beer is.
From the moment you open the bottle you are hit by an overwhelming smell of green apple peel and bruised apple cores.
The flavours are immensely complicated but overwhelmingly satisfying.
You get, in equal turns, orchard fruits, stewed damsons, roast almonds, digestive biscuits, a hint of smoky bacon, nutmeg and star anise, a touch of whisky and a smack of rum.
And after all that, and before you get any respite, there’s the bitter spiky spices of the hopping.
Black pepper and raspberry leaves, fresh green sapling wood and luscious rain soaked hedgerow.
Put simply, this is a sublime beer.