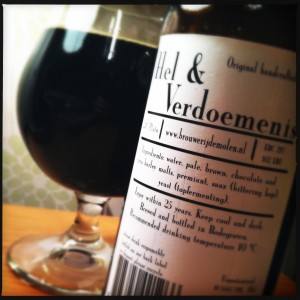 I might have to stop reviewing this brewery as I can’t find anything to fault them on and, as a result, all the stuff I write about them is starting to sound a bit obvious.
With that said, f**k me De Molen make great beer.
Hell & Damnation is an über hopped, high octane, densely dark beer that you’ll want to be in a bigger bottle despite its strength.
Pouring treacle thick and frighteningly dark with no head, this could almost be a big black barley wine (and yes, you read that right).
This beer is so overly hopped it makes your eyes water, so while you smell delicious dark chocolate and flaky cereal malt goodness your attention is taken away by the searingly strong bitter hopping.
Enormous brown leaf dryness, bitingly snappy chilli heat, lemongrass and blackcurrant all fighting for breath in a room with the lights out.
Maybe this is a stout for an evening of S&M.
It’s overwhelming, fun, naughty, embarrassing, sexy, delicious and mouthwateringly brash, and it whips you into submission before sitting on your face and making you want more.
Running along behind all this is a fruity, sherry-like sweetness tempered with a hint of wood smoke that makes me want to put the words barley and wine together.
I’d quite like these guys to make a beer that I can just say, “this is OK” about, because they’re wearing me down in my hunt for decent adjectives.
Put simply, this is sublime.