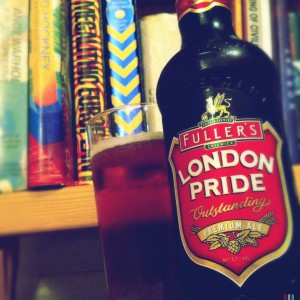 This used to be my beer of choice when out and about in London.
Way before my eyes and taste buds were opened, way way back in the early 0’s, if I was out for a drink and this was on offer I’d drink it.
And you know something?
It’s just as inviting now.
It tastes of nostalgia to me.
Transports me back to South London, meeting up for midweek drinks around the corner from my flat in Brixton with Jeff the mad tour bus driver (oh man, I have some stories involving him) and throwing up on Railton road on my way in to my office at 10am the next morning as I was still too drunk to be hungover, and having to get there because I’d got Placebo playing in the Ukraine and they needed their visas, like, NOW.
I’ve said it before and more than once, of all the big breweries Fuller’s are my favourite.
At least they still appear to care about what they produce.
London Pride isn’t exciting – it’s certainly no ESB or Bengal Lancer even – but it’s a pretty decent drink.
The malts are big and fat and chewy, laden with raisins and sultanas, and the hops sit astride them, slapping the inside of your cheeks with a brittle dryness that doesn’t excite but certainly satisfies.
An excellent standard for your larder and a reminder of why I miss my London life.