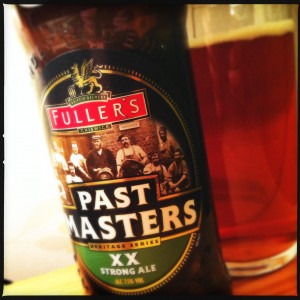 Bottle conditioned and supposedly brewed to a recipe from 1891, Fuller’s continue to be one of the very few big breweries who seem to want to explore beer, still have a real interest in beer, and still try to brew beer for discerning beer drinkers.
This strong ale pours a deep honeyed amber and keeps its wisp of a head right down the glass.
The aroma is rich and fruity, with a lovely hint of Stilton cheese and a big slug of brandy, which is hardly surprising given this beer’s been sitting around maturing for three months.
There’s an enormous amount of spiky black pepper in here, alongside a slightly incongruous but strangely tasty pineapple chunk sweetshop sweetness.
The finish is dry and extends off into the distance leaving a sharp lime rind and caramel coated digestive biscuit crumbling on your palate.
If this marks out the shape of things to come in Fuller’s “Heritage Series” then I for one am going to be right at the front of the queue for the next instalment.