Posted on February 9, 2012 by Simon Williams 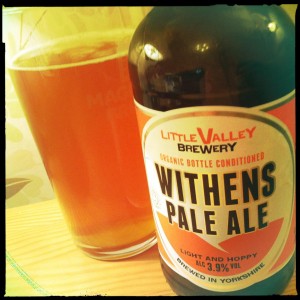 I’m really saddened to say that this is yet another bottle that proves the rule that having the “CAMRA Says…” message on the label more often than not means that the beer contained therein has the right amount of yeast but the wrong amount of flavour.
Withens Pale Ale is a good golden honey colour and has a decent fizz but there is almost no discernible flavour.
I don’t just mean it’s subtle, I mean there is barely anything there at all.
You get a thin sourness that’s not altogether pleasant, and the merest whisp of malt.
Right at the end there’s a hint of bitter, dry hops but that’s your lot.
Hugely disappointing.
Perhaps we’re at the point where there may just be too many breweries being supported for not entirely the right reasons.
And perhaps what we need is an organisation that labels beer that’s really good to drink based on popular consensus and not just made in a certain way based on stringent rulings.
Um.
Hello?