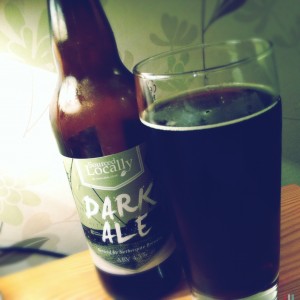 Recently a Twitter chum announced he was visiting my area and wondered if we ought to swap a couple of beers.
I considered the offer for the best part of two and a half seconds before agreeing.
This is the first I’ve opened from the selcetion he dropped off.
Brewed for Co-Op in the East Of England, this is a rather fine dark ale.
Pouring a deep and rich mahogany, this beer smells of rum and raisin chocolate with digestive biscuit chunks.
Taking a mouthful there’s a continuation of the chocolate theme, but the fruit has moved into a stewed plum territory and is absolutely delicious.
This dense prune sweetness is tempered by a really fizzy snap of all spice and a creamy marzipan in the background.
There’s a really good hop at the end too.
It’s dry and crisp, not overly powerful, but contains enough greenery to leave a lasting tang on your palate.
I’d like to try more Nethergate.

Thanks to @spacemaid for the beer.